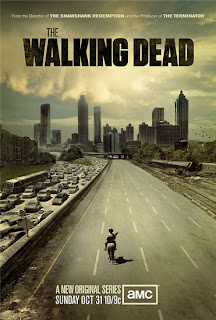 I've been waiting for "The Walking Dead" to air since I saw the promos in early October. I wasn't disappointed, this show rocked.

I've been a fan of zombie movies since 1978 when "Dawn of the Dead" hit my small town theater. The sight of the band of plucky disfunctional anti-heroes cleaning the shambling undead out of that shopping mall didn't scare me, it thrilled me. I wanted to be there with them, brandishing a pistol grip sawed-off shotgun. Big stuff for an 18-year-old girl in a town of 2,200.

Well, I'm not eighteen anymore, but it doesn't matter. Thirty-two years and two college degrees later, post-apoc books and movies are still my entertainment of choice.

"The Walking Dead" opens with a familiar trope. The reluctant hero awakes from a coma and finds the world has gone to hell. No tedious pseudo-scientific build-up, no fake drama, nothing. Just a dazed and wounded man walking barefoot through row after row of corpses in blood-stained shrouds. It was beautifully shot and stylishly underplayed. No schlock, just silent horror. I could almost smell it.

One of the ways to convey horror in a post-apoc is with silence. Dead empty silence. That is one of the things those of us with apoc fantasies both crave and fear. "The Walking Dead" uses this fear beautifully. Rick Grimes is often seen thoughtfully contemplating a world that once seemed so crowded that is now, empty.

Enter the shambling undead. Just a few at first. No need to make it look like a remake of Thriller. The half-corpse crawling through the park is both frightening and pathetic. Rick seeing Morgan shoot a zom in the head and being angry at him for it. The show starts off subtley and builds tension slowly until the swarm in Atlanta. The receding camera shot where the zoms are clamoring over the tank and the horse carcass is a masterpiece. My husband (a fellow post-apoc fan) commented that they looked like maggots. Stunningly effective.

Now, toss in the human drama and hints of things to come. Morgan remains behind with the goal of "putting down" his infected wife as an act of mercy. However, for all his bravado, he can't pull the trigger. Rick's somewhat-estranged wife has hit the road with a survivor caravan. Lo and behold, she's decided to attach herself to the alpha male, who also happens to be Rick's old partner at the sheriff's department. Ouch . . . Atlanta is gone. The CDC is gone. The military is zombie-chow. Yet, a mocking voice through the radio lets Rick know that he is not alone.

What is the fascination with post-apoc drama? I was trying to explain it to my brother today. Post-apoc fiction breaks down into a few categories:

and, last, but certainly not least, the genre that is sort of 2, 4 and 5 combined:

In a post-plague situation if you survive, you are an "immune" and all you have to battle is starvation and crazed nutjobs who want to kick your ass and take your stuff. Same in a post environment disaster. Once the comet has hit, your day is about as ruined as it is going to get. You may die of cholera, but nothing is going to hit you again. Aliens may certainly kill you, may even eat you, but (unless they are Borg), you aren't going to become an alien. All of these scenarios are scary, but manageable.

Enter the zombies. The ultimate fear-factor. First, you may be immune to the initial outbreak, but one bite or scratch and you will be coming back for more. Second, a zombie outbreak is the catastrophe that keeps on giving. You can't rest. They keep coming. Clear out a building and it could be swarming again by morning. Until you've blown the brains out of about six billion of your fellow man, you are not safe. Third, oh yeah, the few other crazed starving survivors will want to kick your ass and take your stuff.

AMC did a brilliant job portraying this fear and fascination in the first episode. As it progresses, I expect to see a typical character arc develop: the reluctant hero, the arrogant alpha who seeks redemption, the plucky tough chick, the damsel in distress, the older voice-of-reason, the precocious old-before-his-time kid.

There will also likely be some political intrigue as the "why" begins to seep into the storyline. No problem. CBS tried with "Jericho" and almost made it. The limitations of the mainstream media were too much and the show fell into cliche-dom and failed. Cable can do justice to this classic storyline. However, there is one thing that will send me screaming from my TV and back to Netflix for Romero classics - if the storyline devolves into the weirdness that was "LOST." No way, no how . . . the mere hint of a smoke monster and I'm done.

Until then, I'm already counting down to next Sunday and if I read the ratings right, so are about five million others.
Email Post
Labels: Movies & TV