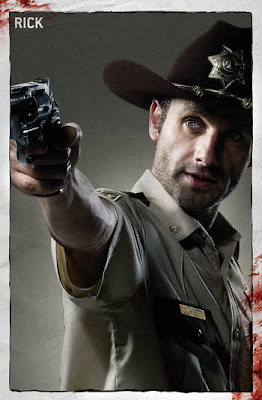 Episode 2 of AMC's "The Walking Dead" aired tonight and the only disappointment was that it was only an hour long!

Tonight we met some more of our merry band of heros: the Plucky Heroine, the Wise-Cracking Kid, Father Figure, and a few that I believe are going to be DVs (Designated Victims, better known as Red-Shirters for the Star Trek fans).

Seriously, this episode was a fine set up for the rest of the first season. We learned something more about the Walkers. They track prey by sound and smell (Can't you smell that smell?) and they can be fooled for a short time by smearing yourself with zombie guts (I love the pair of lucky zombie feet hanging by the string of intestines, nice touch.)

There has also been the first act of inhumanity, leaving Merle chained to the roof. That will call for an act of redemption . . .

A few questions were tacitly posed, to be resolved when our two bands of wayfarers meet up:

1. Were Shane and Lori hitting it before the Zom-Poc hit?
2. How badly hurt is T-Dog?
3. Is Shane already cheating on Lori with Amy or is that to come?
4. Will Merle ever get off that roof?

My final prediction, the one I know is a dead bang sure-fire winner, season 1 will end far too soon . . .
Email Post
Labels: Movies & TV