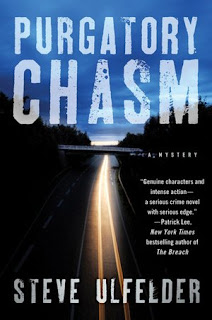 You wouldn't know it by looking at my 1995 teal green Mercury station wagon that resonates down to its rims at 67 mph and my intense dislike of left turns in traffic, but I have a real fondness for racing.

My dad used to take me to stock car races and drags when I was a kid and I was a teen before I learned that most little girls didn't spend their birthday at the Auto-Rama.

However, I'm not a pit bunny and I don't have Jeff Gordon pillowcases. My first degree is in engineering and I have a real appreciation for the art and science of racing. That's important because main character Conway Sax isn't just a mechanic, he's a former racecar driver and race mechanic. That makes him part of a special breed and gives Purgatory Chasm its unique flavor and cadence. You will enjoy the book more if you are already knowledgeable in the sport or are open to learning something about it.

When I read genre, I want the jargon, language, and mood to be authentic. Whether it's military, cop, or legal fiction, if it doesn't feel real, then I'm not going to buy into the story. Steve Ulfelder uses his racing experience to put you into the mindset of a driver. Conway's actions and motivations are filtered through the concepts of target fixation, situational awareness, and the red mist of rage. His knowledge, reflexes, and attitudes are used to maximum effect in this sharp-edged hardcore murder mystery.

Enter Tander Phigg - long time Barnburner and even longer time jackass. The request is simple on its face. Phigg would like Sax to retrieve his special Mercedes, apparently in the clutches of an unscrupulous mechanic. However, when Sax finds himself sprawled on the garage floor with a lump on his skull and a headache to match, he discovers something he already knew, when Phigg is involved there is no such thing as simple.

Phigg can't even die in a straightforward manner. Suicide or murder staged to look like suicide? The evidence is split and Sax decides to follow the leads and play out the hand. After all, Phigg was a Barnburner. . .

Enter a cast of characters where everyone has an angle, everyone has an agenda, and everyone has a secret. Ulfelder serves up a nicely woven web of potential suspects, setting them up and knocking them down with ease (I hope to see more of the Beet Brothers in future books). I had my suspicions, but wasn't 100% sure who the killer was until the actual reveal. Then, in the manner of all good murder mysteries, you see the clues were there all along.

In a nicely crafted subplot, Sax must also deal with the specter of his father. The rat-racing and rock-running illustrate the eternal conflict of a son who both wants to please and beat his father and a father who is simultaneously proud and threatened by his son. The resolution is elegant and bittersweet.

So, if you like your books fast moving, action-packed, and with a ring of truth in the characters and settings, then Purgatory Chasm is for you. Go get it now! I was lucky. I scored this great book as part of the prize booty in a contest on his agent, Janet Reid's blog. The other prize was an ARC of "The Whole Lie," the second Conway Sax book. Why, yes, you should be jealous.

Overall, I give Purgatory Chasm four snaps up and throw in the bag of chips for this line: "A street car is a tool. A racecar is a weapon." Ulfelder will only get better as he keeps writing.