It was just another Wednesday when literary agent Janet Reid told her faithful chum readers to stay tuned because something was brewing. This usually means we are about to be tested with fire. 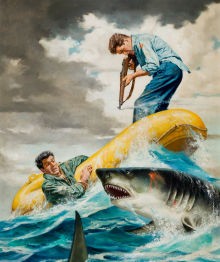 On Thursday, we found out that the prize was worthy . . .  Insurgent is the sequel to the wildly successful Divergent. And this was an ARC. Whoever holds it also holds the right to say, "Could you believe the ending to chapter 7? Oh yeah, that's right, you haven't read it and won't be able to for SEVERAL MONTHS." And then nod sympathetically. 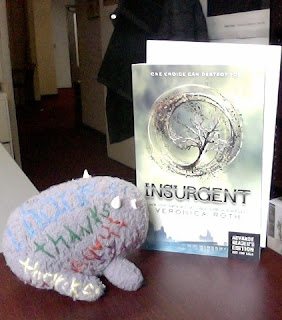 The challenge was to write a 100-word story using the following words:

My entry was originally titled "Outside The Wire," which was military slang for leaving the protected compound or "green zone" and going on patrol.

It was raining lead in beautiful downtown Baghdad. Ducking into a storefront, I risked a moment’s respite only to find the space already occupied.He was my age, another modern-day Crusader bound by ancient allegiances and trained to destroy. My Kevlar and his Keffiyeh framed tired eyes and harsh lines that sleep would never erase. “Stop fighting and I can go home,” I said.“Go home and I can stop fighting,” he replied.Silently we made our choice. The sequel might end differently, but no killing today. Nodding, we backed through our respective doors. Back out into the rain.

This was another unpubbed flash I had in my portfolio that needed reworking and editing. In the cauldron, it became better.

A few comments later, I got all the prize I needed from a reader:

"I hereby cast my non-binding, unsolicited vote for Terri Coop's Baghdad Rain (as I've christened it). And for her very healthy fear of clowns. Seriously, check out her blog if you want to cry yourself to sleep tonight. (Shudders)"

First thing I did was change the title of the tale. In my hard drive and memories, it is now "Baghdad Rain."

::cue JAWS theme music:: OH NOES! ::run and quadruple check my entry:: Sigh of relief. I have used the word in its strictest sense, which is duty and loyalty to country and government.

Back to the Oscars TwitterParty.

I can't pick a winner in the INSURGENT contest! 8 finalists FINALLY winnowed from the 155 entries, but I can't pick ONE!#NotSoDAUNTLESS

And then she introduced us to www.drawastickman.com as a distraction. Uoooohhh . . . shiny . . .

"For those of you wondering about the contest results on the INSURGENT writing contest, I've had to call in reinforcements to help decide."

Hmmm . . . sounds interesting and ominous. The stakes were climbing. Yesterday morning the results posted. I am both proud and pleased to have been named one of the eight finalists out of 155 entries. I didn't bring home the prize, but that's okay. This contest was a cage match and making the title round was what mattered.

And in the prize post was a hint that future competitions are going to be ramped up.

One entry however made me want to read the next page.

***
So, now along with setting, character, conflict, and resolution, there is going to be an undefinable standard of enticement. Did the ending both resolve the current conflict and hint of more to come? Is the 100-word flasher, in reality, the first act of a larger story?

Unknown said…
Congrats on finalizing your allegiance to Mother Shark (the cyber-country). I found your entry poignant and one of the best.

Congrats to you, too, from a fellow "Eighter" as I shall now name us and I loved your story... there *IS* a book there between those two MC's... wow.. that was intense for 100 words :)

Nate Wilson said…
It's a fantastic story (as was your previous winning entry). I particularly like the exchange between the two crusaders. I'm just glad I wasn't the one who had to pick a winner.

On the topic of clowns (I realize this comment is better suited to your other blog, but I'm lazy), I've never had a problem with them myself, but yeah, they're creepy. I always illustrate it like this: Imagine you're walking alone in the woods, and a clown steps out from behind a tree. (The End)

Congrats again on the near-win. I look forward to seeing what you come up with for the next sharkly contest. Oh, and one more thing...

This tale is the basis for a story I am subbing to an anthology. The theme is sci-fi/military. So, fast forward to Mars and the two sides are still fighting each other. However, instead of killing, they sit and have a smoke and talk.

The clown thing is for fun and laughs. However, we all wish our personal blogs got the traffic clown-land does. It is my hobby.

Unknown said…
Good story. I got zip from the prompt words, as often happens. I either ignite right away or never. Keep up the good words.
February 28, 2012 at 6:52 PM

Bookie said…
Good Morning. This is my first at your blog and think your 100 word piece is stunning. I came here because I was reading your Emma Bombeck winning piece, which I enjoyed greatly too, and saw you were from Ft. Scott. Since I grew up in Erie, I felt like we were almost neighborly! Have a great day and congrats on your wins.
March 5, 2012 at 8:06 AM