Divergent - What's in Your Fear Room? 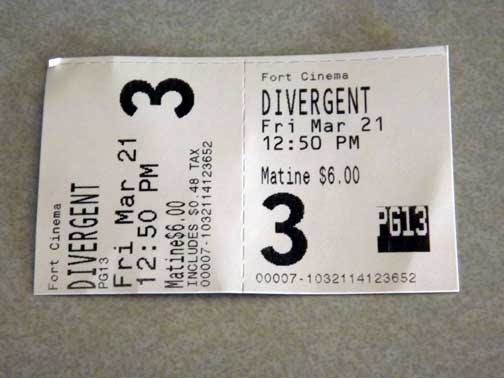 I just got back from seeing Divergent, the movie adaptation of Veronica Roth's runaway best-selling trilogy.

First, the technicals. I hope this movie makes eleventy-seven-billion bucks and shows moviemakers that you can make a blockbuster action flick by holding the damn camera still. I hate shaky-cam like fire. Divergent blew Hunger Games out of the water on cinematography alone. Sets were beautiful. Costumes were beautiful. The CGI and backdrops were beautiful.

*swing the camera around your head on a rubber band.*

No, "ERMAGHERD, WE'RE EDGY AND DARK!"

I want movies to be immersive experiences. I want them to be real. When the filmmaker inserts himself into my experience with stupid camera tricks, I get stabby.

Second, the casting. I saw a lot of screaming in social media about the choices for Tris and Four. To hell with that, those kids were perfect. And Four was sex on wheels.

That out of the way, the strength of the movie is the gut-punch. The Fear Room. The Factions. My own self-examination on my 15-minute walk home from the theater.

I'm pretty damn bright. With no help or grooming from my family, I went from a trailer park on the other side of the airport to degrees in civil engineering and law. The only thing that stood between me and comfortable careers in both was a lack of desire to conform. So, on choosing day, would I have slid into the logic and comfort of Erudite?

However, you wouldn't know it by looking at my pale-skinned, lumpy, middle-aged self in cargo pants and polo shirt, that I've climbed red iron, went up the side of an oil tanker on a rope ladder, and calmly held my shit when I lost the rear end of my car on the ice, slid uphill, and came to rest sideways less than two feet from the traffic on a state highway. Not to mention a few things I was involved in that are better left unsaid until I'm positive the statute of limitations has passed.

These days I am more likely to express the Dauntless side of my nature by doing things like walking away from jobs that don't please me, from people that don't support me, and property that doesn't serve me. I find it funny that I now have the wisdom and experience to face physical and mental challenges, and can only wish I still had the knees and flexibility. If I had my half-century brain in my teen-self, I would have been the first jumper without question.

One of the main questions of Divergent is what do you fear and how do you face it. The final test for joining the Dauntless faction is the Fear Room. It is a simulation where you confront and overcome your greatest fears.

What do I truly fear?

I've certainly been afraid before. I've had a gun put in my face and a hand around my throat that was more than capable of going through with the implied threat. But in the end, the real pain wasn't physical, it was the rejection and betrayal inherent in those actions.

Death? I'm in no hurry to cross that bridge, but after a knock on the door in the middle of the night in 2009 and the four words that change everything, "There's been an accident," I understand there are things far worse than dying.

As you get older you can do one of two things. You can let the insecurities and fears of your youth grow and consume you or you can shed them.

I have a feeling my Fear Room would be a complicated place.

Divergent is 5-stars, two-thumbs up, with a round-the-world snap, and a bag of damn chips. Well done to all involved, from the writer, to her agent, to her editors, to those who adapted it for the screen, and the filmmakers who pointed the cameras and let the action unfold.
Email Post
Labels: Writing

I couldn't agree more! I have non-positional vertigo, and a shaky-cam, quite literally, nauseates me. I couldn't watch most of Woody Allen's "Manhattan Murder Mystery" because the action was so jerky.

Anonymous said…
Agree w/Kitty, shaky camera action makes me sick. I went with my daughter to watch Blair Witch - or some movie like that...and about 1/3 of the way through I was sick and couldn't watch the rest. But then again, I got sick watching America's Cup racing while at home. No deep sea fishing for moi.

Robin said…
I've read the books and want (very much) to see the movie. Janet Reid linked to this post on her blog, so you might get more visitors:)

I tried to follow but GFC is acting up. I will try again later.

Love your take on this movie. Hate Shaky-Cam. And fear is a complicated thing. I am not convinced that most people even know on a conscious level what holds them back from doing what they wish they could.
March 22, 2014 at 6:06 AM

LynnRodz said…
I love your review and like everyone else here I hate a shaky-cam with a passion!

@Hank: Would you really prefer the V.F.? It's true, no one dubs better than the French, but so much is lost in translation! Even after more years than I care to admit here in France, I prefer to see a film in V.O. whether it be in French, English or Spanish. All others, I need subtitles!
March 22, 2014 at 6:35 AM

My theater was an interesting group. We normally don't get first run here on opening day, so no way I was missing it.

I shared the theater with some high school girls obviously playing hooky, some college kids, and plenty of folks my age. While I'm sure the demographics turned when school was legally out, it shows the wide appeal of YA.

The FB comments are pretty much either like mine, or, HATELIKEFIRE because the filmmakers changed something sacred to readers. Two that really amused me were:

Most anger was about minor and secondary characters. Even when the criticism was baseless and unwarranted, it shows how enormously invested readers are in the world of Divergent.

I think they did a brilliant job condensing an enormous story into a compact 3-act movie. It is a visual feast. Evidently, Insurgent has been green-lighted for March 2015. I know I'll be there.
March 22, 2014 at 7:16 AM

Unknown said…
Terry -- one of the best posts I've read in a long time. Thoughtful and well-written. I wondered what I am most afraid of--can't think of anything I fear most. Not because all fears are equal, but maybe, like you, I've faced some of the hardest things one can face. This line from the movie Damages has stuck with me: "Damaged people are dangerous--they know they can survive anything." Probably not anything, but pretty damn much. Maybe that's the fear, to be the last one standing.
March 24, 2014 at 2:56 PM

Terri Lynn Coop said…
Thank you for your kind words and for stopped by.

Got to face another fear this week, that things would go horribly horribly wrong, that I would be powerless to stop it, and would have to watch it come to its conclusion.

I faced it, didn't panic, reached out for help, and was able to deal with it.