On Therapy and Gardening . . .

As I type this, it is snowing in Kansas. My winter wasn't harder than those in the east, but, just, damn. This needs to be done with. As the white stuff swirls down, I have to laugh, because I was out working in my garden this morning.

I've been in a funk lately. I jokingly call it "ennui," but reality is that I've been showing bad signs. Sleeping too much, hard to concentrate, no ambition or desire to do anything but crush candy and avoid my responsibilities. I was a public defender long enough to recognize signs of depression and PTSD. I need to get a handle on what's going on in my head and heart. I even talked with my best friend about therapy. I have everything in the world going for me and every reason to be happy and I'm not. I know, first world problems, but my happiness is my own responsibility.

Well, at least for today, something else worked - my garden. Last summer, I bought a house built in 1950. Delightful mid-century-modern. Worn, but still the real deal. In my quarter-acre backyard there is a row of lilacs. Huge towering bushes that are a rat's nest of dead limbs, vines, small trees, leaves, weeds, and trash. I doubt it has been tended in 20 years. When I moved in they were in full bloom and nearly impenetrable. By the time the leaves were off, winter had arrived.

So, first, the right tools for the job:

I didn't even know where to start. Still listless and in a funk, I grabbed a dead branch and clipped it off and then another and another. Grabbed some dead weeds and yanked them out by the roots. I heard old tapes playing in my head, "YOU'RE SLOW AND YOU'RE DOING IT WRONG!" I told those voices to fuck off and kept clipping. Before I knew it, I had this pile in the corner of the yard.


Damn. I could also now get through the thicket of bushes and start pulling out more of the leaves clogging the roots. I found lilac bushes with 5-inch thick trunks that could well date back to when the house was built. I didn't get half the leaves, but I got this batch.


I did it my own way. I just kept clipping off the dead parts, sometimes able to wrench a rotten limb off one of the eight separate clusters of lilac trunks. It was wonderful. When the "you can't do this, it's all wrong, just stop" voice came up in my head, I told it to shut up and clipped off another dead branch.

At the end of two hours, I had gotten through about a quarter to a third of it and still a ton of mess to bag/bundle/haul. Oh well, it didn't get that way overnight, it won't be cleaned out overnight (I checked with the Queen, she isn't dropping by any time soon.)

Someone else might have screamed that it needed chainsaws and power tools and hacked them down to the ground. But not me, I just kept clip, clip, clip. Eventually, a big cut may be what it is needed. But, for today, I enjoyed following twisted gnarled branches, the thick bark crusted with lichens, thinking I would have to cut it out, only to find it covered with new growth. It lightened my heart. I decided that any branch with new growth would stay at least until autumn.

I forgot to get a "before" pic, but this was after two hours. 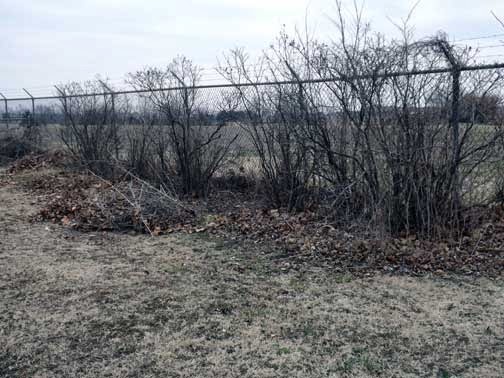 I know, it doesn't look like much now, but in another month it should be covered with green and getting ready to bloom with big purple brushes of flowers. The more it leafs out and blooms, the easier it will be to identify and prune out the dead parts. I'm hoping that opening up the thicket to let in light and water will encourage the new growth erupting from the base of the plants. When I get the leaves and the petrified trash out, I'll add a layer of mulch.

There are eight separate shrubs, each up to eight feet tall (the chain link is seven feet tall.) That type of old growth garden is worth working for. This is what kept me going: 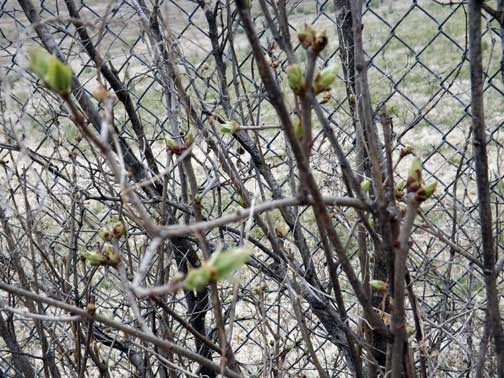 I feel much more mellow and focused. Maybe I need to attack the other things vexing me by not worrying about what others might do or how they might think about my methods. Maybe I just need to grab a dead bit and clip clip clip (However, I highly recommend that whether you are attacking your problems or your lilacs, start with the pointy stuff at eye level. Just trust me on this one.)

Maybe if there were more gardens there would be less need for therapy . . .

Unknown said…
Glad you found your way. I sympathize, because anxiety and the D word has been kicking my butt for weeks. Very impressed with what you accomplished. I'm imagining those lilacs in bloom, inhaling that sweet aroma.
March 24, 2014 at 4:21 PM

Robin said…
As someone who has spent the last year, off an on, working in the garden AND the last year, off and on, in therapy... I recommend both. I discovered a kind of therapy called "tapping," and it has really made a much bigger difference than just sitting and rehashing the same old crap for the umpteenth time. Gardening also helps because you are throwing your energy into life. Creating something beautiful. Or something good to eat.

Terri Lynn Coop said…
You all are the best. Thank you. It proceeded to snow for several hours after and we had yet another hard freeze. No planting yet, but this afternoon, when it is as warm as it is going to get, I will much some more leaves out from behind the thicket. *hugs* to everyone.
March 25, 2014 at 9:29 AM