If it's spring, it's time for the newest book from Steve Ulfelder to drop. The fourth installment in the Conway Sax series, Wolverine Bros. Freight & Storage hits the real and virtual shelves on May 6, 2014. It is available for pre-order right now (go on, I'll wait.) 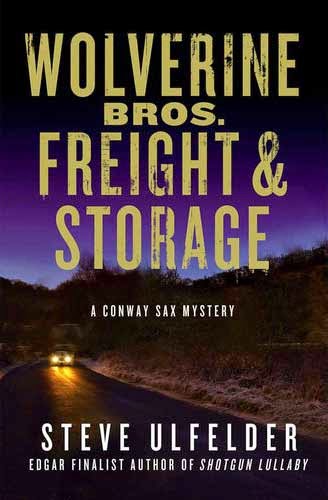 Now that we have the necessaries out of the way, let's take a look at why this book is so damn good . . .

I had barely forgiven Steve for his crimes against antiques in Purgatory Chasm, when he hauls off and kills Eudora Spoon in Wolverine Bros. He doesn't just kill her, he kills her bad. She dies in the arms of Conway Sax in a way that will leave you, the helpless reader, as angry and heart-broken as our hero.

Conway, on the ropes after losing Charlene, has been stripped raw of the veneer of civilization being part of a family had given him. This Conway is only one step above the chaos and anarchy he'd found at the bottom of a bottle so many years ago. This Conway, even though he still wears his personal code of honor like armor against the darkness inside him, is a damn dangerous dude.

He distills his grief and loss into one thought and that thought becomes his mission: Someone has got to pay.

Part of Steve's strength is in his descriptions. Anyone who has ever misspent their time in a dive bar will recognize the clubhouse in the opening scenes and anyone who has ever had to deal with their obnoxious chronically drunk friend or frat brother will immediately recognize Kenny Spoon. If the passage where Conway carries Kenny out of the bar and throws him into the car doesn't squick you out, you aren't trying hard enough.

And that brings us to what separates Conway Sax mysteries from the others - the relationship between man and machine. Conway doesn't just drive. He dons each vehicle like an exo-skeleton and makes it an extension of himself. In his hands, every car is a both tool and a weapon. Let's suffice it to say that in the opening passages Los Bajamaros got a lot more than they bargained for and the world is short one virtual lowrider and SUV.

There are a pair of scenes where the situational awareness of a racer elevates the common car chase into edge-of-the-seat thrills. When Conway is on your tail in a red mist rage, the ice-packed roads work in his favor, not yours. Steve uses his own skills and experience as a driver to put the reader behind the wheel as you bump draft on the ice, only inches from your quarry. At the last minute you'll pull your emergency brake, drift, and watch all your hard work pay off. Damn, California boy never had a chance.

The other chase evokes shades of Jack Reacher. Conway works his way up the icy mountain, mentally calculating the curves, choosing his path, and using the conditions to his advantage. Faster and faster the gap closes. Closer. Closer. Until he goes too far and sees his own obsession reflected in the horrified expression of an innocent. Like Reacher, he understands that his strengths can terrorize and appall. He has to reach deep and pull his humanity back.

I'm going to fall back on a classic to get this point across. After I read Wolverine Bros., a thought nagged at me. A better way to explain it by one of the best writers ever. So, I dropped in at the library and grabbed a copy of Space by James Michener (Random House - 1982.) Test pilot Randy Claggett and Conway Sax are cut from the same cloth when it comes to their relationship with machines:

"In simpler terms, the test pilot was supposed to put his plane into every conceivable kind of jeopardy, bring it out safely, and record precisely what happened before, during, and after the crisis. . . . Randy Claggett might sound illiterate at a Solomons beer bash, but when he brought a test plane back to Earth, he wrote with the precision of a writer for Scientific American . . . And Randy always wanted to know how Pope had felt when the strange things were happening: 'That's a better guide than all the telemetry the engineers invent. . . How your guts felt when the plane yawed unexpectedly. How did your ass feel when it started to slide? Did you feel your eyes drifting? Goddammit, Pope, you're the most expensive instrument they'll ever put in those planes, and the most complicated, so trust your reflexes'."

If you get that passage, then you will get Conway Sax. (Since I once had an entire diagnostic conversation with a mechanic based on whether I felt the vibration in my hands, my feet, or my backside, I find it difficult to relate to anyone who doesn't get it.)

Throw in a torrid love triangle, a lady gangster, a gutting betrayal, escape from captivity, and a pair of greyhounds named Dandy (for Dandy Dick Landy) and Cha Cha (for one of my childhood heroes Shirley "Cha Cha" Muldowney) and you have Ulfelder at his best. Everyone has an agenda, everyone has a secret, and nothing is what it seems. The clues are right there in front of you . . . go on . . . solve it . . . I dare you.

Like most series, you get all the little nuances if you have read the three previous books. However, Wolverine Bros. is a complete stand-alone, so don't hesitate if you haven't done all your homework.

I will close with the obligatory disclaimer. Steve Ulfelder is a friend of mine. Not a "our kids played t-ball together" or "I knew his wife in school" friend, but a friend based on my fondness for his writing and just general coolness. I won a pair of his books in a contest a couple of years ago and found out there is a hell of a nice person behind his tough guy main character. This review is based on an ARC, but, pfft, I had ordered my copy back in November of 2013.

While you are waiting for your pre-order to arrive, here is some fun to pass the time:

Check out what his agent has to say about her client.

Of course his greyhound has her own Facebook page.