I'm no stranger to the Internet. Social media, forums, chat rooms, and blogs let me hang out with friends and like-minded sorts while still kicking back in my little house on the prairie. I don't have kids. I don't vote republican. I don't go to church. So, that leaves the conversation topics with my neighbors pretty damned limited. 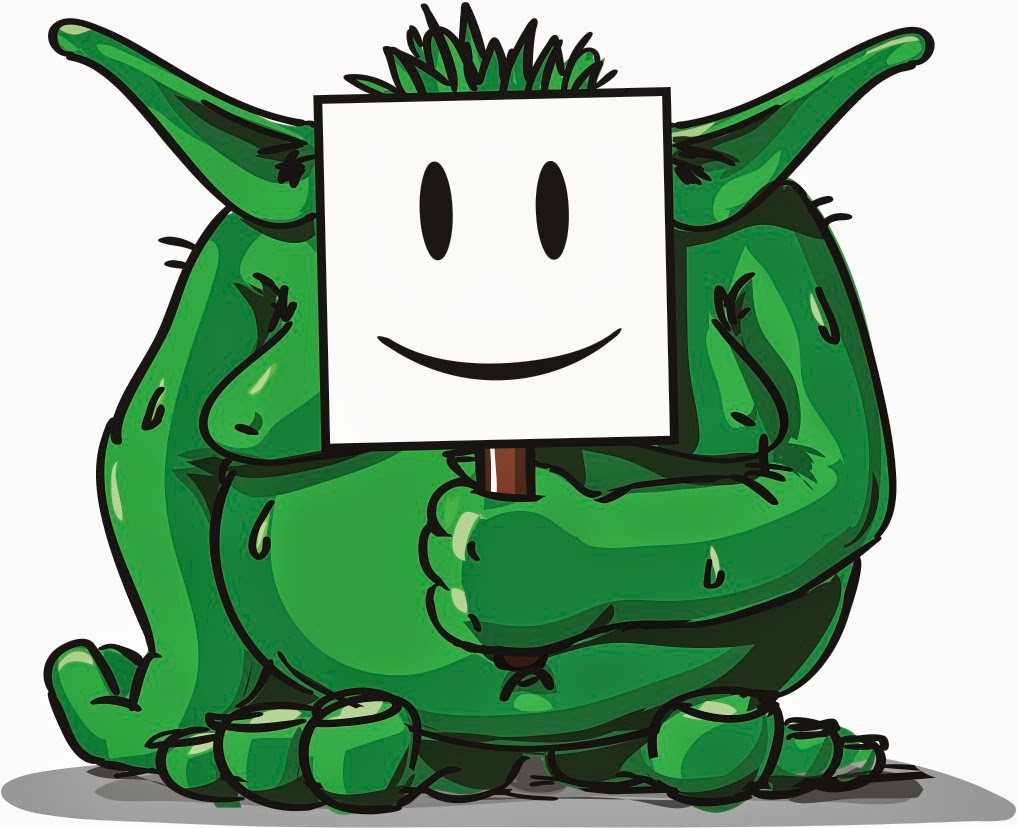 As a result, I'm no stranger to trolls either. The new generation of net trolls has come a long way from the acne-crusted boys who would drop "Show us yur tits!" in your forum before slinking back to the 4chan "b" board. Today's brand are less obvious and more insidious, popping up in otherwise rational discussions to turn the attention onto themselves and keep it there.

I rarely shrink from an Internet dust-up, especially on political issues. Let a hint of intolerance drop on issues of race, marriage equality, women's rights, etc. and it is on like Donkey Kong. I also try to keep my fights in the places people go to fight. You follow me there, you do it at your own risk. I have been trolled with a vitriol that is eye-watering. Hell, I've been trolled by Todd Kincannon himself, the Emperor of Troll Mountain, not to mention the delightful "Bossy Cow" incident.

So, I know of what I speak. Tonight, in a private Facebook group, I watched an epic battle unfold. I started reporting on it and basically identified 10 separate and distinct stages of a troll infestation. Once they appear and take root, your thread is dead. Just kill it with fire.

Stage 1: "The Expert Opinion." The discussion can be about whether the sky is blue. Someone, usually not well known to the group will wade in and "settle" the question with a dissertation about the actual color of the sky, backed up with all sorts of credentials (real and/or imagined.) Of course anyone who questions the EO is immediately informed that they are wrong and why they are wrong.

Stage 2: "The Rationale." When the EO is called out for being a pompous ass, the EO will get quite huffy and will reiterate their qualifications and state that they were just trying to educate the audience on the factors contributing to sky color.

Now, many threads get to this stage. I've waded into quite a few arguments myself on legal issues. This is the point where the sane and logical retreat and the thread veers off into weekend plans and cat memes. However . . .

Stage 3: "The LOL Gambit." The EO will start taunting detractors, ending every post with a pseudo-ironic ". . . lol." Because, well, anyone who disagrees with them is obviously so utterly amusing. Pointing this out and that it is smug, tedious, and rude, may (and that's a big may) shut it down. A trait peculiar to political discussions is along with the ever-present "lol," there will usually be a "sheeple" and "u a moran."

When this occurs, I hate to tell you, your thread has trolls. Seek treatment immediately.

Stage 4: "The Tears of a Clown." If you call the EO out about their incessant "lol," you may get a world-weary "I laugh because I've seen it all. Otherwise, I would cry." My apologies for beverage damage to your monitor or keyboard. But, forewarned is forearmed.

Stage 5: "The Victim." This one is simple to spot. It is a variant on "I just don't understand what you all are so upset about . . ." fraught with an unspoken "I was just correcting your ignorance." You can just hear the *heavy sigh* as your EO dons the mantle of their martyrdom.

Most will flounce at this point, often with great melodrama. 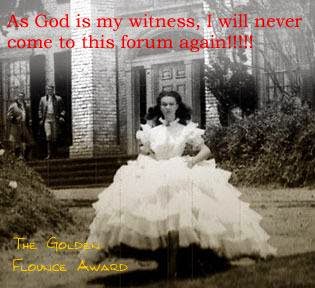 But tonight we had a pro.

Stage 6: "We Must Stand United!" Your EO will now likely make a plea to the lurkers for U&S, short for "Unity & Sympathy." Trying to rally the forces against those who didn't accept the EO's brilliance at face value. A common sign is, "No one else gets treated like this!" This will occasionally generate a sympathetic flounce, "I hate this group too," while pausing to comment on a thread about how you don't like the thread.

At this point, there is only one way this can end. Your thread is in the florid stage of Godwin's Disease. It is also contagious, and if not monitored, could begin to infect other topics. In a political argument, it would be over very quickly. However, this one lingered, like an all-day hangover.

Stage 7: "The Strategic Retreat." The troll will disappear and a period of odd peace will descend on the thread. In political kerfuffles, it is often accompanied by something like, "I'd love to stay and argue, but I have to get to work to pay for your welfare." A fellow author once told me to, "Head on back to the hood and figure out which of my baby daddies I was going to shack up with that night." Keeping it Klassy (as in KKK.)

Note, at this point, you will likely have a peacemaker appear and try to diffuse the tension with pics of flowers and cat memes along with pleas, "Can't we just all get along?" Rarely, but very rarely, this is the end. It is far more likely your troll is monitoring every word and waiting for the right moment to pounce.

Stage 8: "Thread CPR." Depending on the length of the retreat, the thread will start to wander and lose steam. Left alone, it would die of its own weight. But a true EO will not be able to resist a shot at the last word. Today's EO posted helpful memes about "healthy relationships" and "emotional abuse." Like a misplaced cough when the baby is finally asleep, the thread is up, wide awake, and off to the races again.

Stage 9: "The Reasonable One." The final stage of Godwin's Disease. Your EO will make smug patronizing statements that they are the reasonable one and you all should really apologize for being wrong. Stage 9 may include helpful checklists of the symptoms of narcissism. Keep a tissue handy because the irony will be oozing from your monitor. 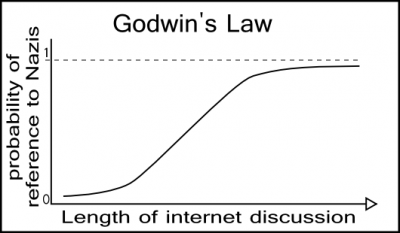 Stage 10: "The Inevitable Result." Yes . . . Godwin. Just because the word Hitler or Nazi may not be explicitly used (many modern political threads also leap to "socialist" and "commie,") doesn't mean your thread hasn't gone there. This particular thread went off the cliff when anyone who didn't agree and apologize to EO was a psychopath. That is effectively Godwin'd.

At this point, your thread is dead. It cannot be saved.

If you don't kill it, expect a passive-aggressive DO . . . LOOP to creep into your discussion. You will hear about EO's tragic past and how hard-earned their EO truly is. There will be accusations of stalking and terroristic threats and the EO will opine on the general lack of civility on the Internet. The bad thing about this snippet of code is that unless you programmed in an EXIT, it is on an indefinite play. It will never end.

If your EO compares the emotional suffering they have endured trying to educate you to the experience of either combat veterans or rape victims, you are entitled, no you are required, to reach through cyberspace and junk punch them.

Know the warning signs and you may be able to avoid a full-on troll infestation. If you see any of these signs in yourself, back away from the computer slowly. If you can't resist, then junk punch yourself.

writerontheriver said…
You just couldn't help yourself, could you? In following this thread I could tell you were simultaneously enjoying it and lamenting the sad disposition of another of our human race. It does give you a chance to apply your biting wit and cleverity (is that a word) to an otherwise useless individual, unworthy of our time other than to use them as an example. Sadly, this troll will probably vote...
March 26, 2015 at 1:25 AM

Terri Lynn Coop said…
The epic trolling continues and the admins are all missing in action.

She is now "educating" us all on the trauma of rape victims.

Right now, because of her actions, an otherwise rollicking and supportive forum is essentially dead.

Unknown said…
So sorry that this happened ~ It's something i have observed with regularity. I have been MIA for about a month, catching up on my new addiction, House of Cards, so i missed the fun. Dammit! Hello Good Luck Duck!
March 26, 2015 at 8:21 PM

Terri Lynn Coop said…
I left the group. Just too much drama from the admins. It was made real clear what their position was and I didn't feel it squared with what I had enjoyed about being there.
March 26, 2015 at 10:54 PM