It has been far too long since I put up an episode of Writer Fuel. It's not that I stopped my insane obsessive teacup collecting. It's certainly not because I've quit drinking tea (perish that thought.) Just reasons . . . 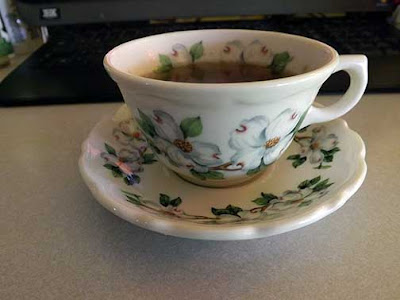 My latest search-and-destroy missions have been for vintage restaurant china. I love it. Stylish, durable, and nothing is more America, than a cup of something hot served up by a waitress with a beehive.

This is "Dogwood 2" from Syracuse China, one of the Big Three in diner china. Made from heavy vitrified china (some of the manufacturers got their start making clay water and sewer piping.)

The backstamp identifies if from either between 1946 and 1962 or 1965 and 1974. The pattern "Dogwood 2" has been positively identified in 1959 as in use at the Hotel Roanoke (thanks for that tidbit goes to The Restaurant Ware Collectors Network.)

Found at a thrift shop in a neighborhood that needs signs that say, "No hoodies, do-rags, or sunglasses allowed." I should have brought it all home. NO! Cups only! Okay, maybe a berry bowl. If it's cheap . . . GAH!
Email Post
Labels: Writer Fuel