View From the Cheap Seats ~ Springsteen Sails The River ~ Part 2 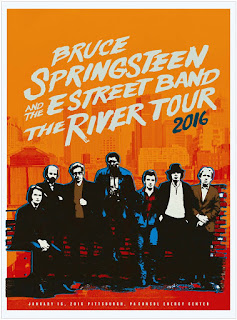 I want to thank everyone who read Part 1 of this adventure and my thoughts on the Boss. Today, Max Weinberg's 65th birthday, seemed like a perfect time for Part 2, a discussion and review of "The River Tour 2016."

Through luck, happenstance, persistence, and being in the right place, I saw The River concert three times this tour. I was already going to be in Tennessee, so why not come home via Kentucky, then new tour dates, but, I'd better get tickets to Oklahoma City because I had an appointment on the morning that Kansas City went on sale, oh, my appointment was cancelled, well, it's right here . . .

It was worth every aggravating minute dealing with Ticketmaster and AXS. Although, I will say that AXS is a world more superior. I was able to choose my section and the whole system worked much more smoother. It is not as populated with scalpers as Ticketmaster. I had too many friends aced out of Ticketmaster for shows I know damn well weren't sold out.

Each night, I'd climb my way up to the upper deck and watch the crew do the final set ups. The best job in the world has got to be the guy who comes out carrying that classic guitar (you know the one I mean) and does a sound check, setting the crowd to cheering.

Then the signal to get your butt in your seat because the lights are about to go down:

This rollicking anthem was a signal, a one way ticket back to 1980. As an introduction, Springsteen tells us that The River was his coming of age album. He'd been through a bruising lawsuit to recover the rights to his music and had lost that Turnpike Rebel aura of Born to Run. Now he was singing about life. He said he wrote the album that he hoped would get him closer to the home he was trying to find. Then the mighty E Street Band launched into The Ties That Bind.

Cheap romance, it's all just a crutch,
You don't want nothin' that anybody can touch,
You're so afraid of being somebody's fool,
Not walkin' tough baby, not walkin' cool . . .

Singing back to back, songs he wrote when he was only a bit older than his own kids, the tour is not about nostalgia. Bruce doesn't cover himself. He interprets every song according to the time, his mood, and the crowd. I got to see the same show, the same basic set list, performed three different ways.

Louisville Kentucky did have a vibe like a gathering of old friends. A lot of smiles and a lot of laughs, with plenty of groups at the microphone including his wife Patti. Yet, barely two months later in Kansas City, the show crackled with raw energy and the edges were much sharper. Going on tour with Bruce Springsteen is like stepping into a time machine, he gets younger with every show.

Most of the show is classic Boss, with nothing more than a one, two, three . . . FOUR between songs. However, in The River, there is some narrative where he talks about where he was in his head when he wrote the song.

For Independence Day, he talks about escaping from the perceived stifling conformity of his parents and how the young only see the compromises without seeing the blessings those compromises bring. When he wrote this, he didn't know it, but he was about to step onto a roller coaster, starting with super-stardom in 1984 and ending two marriages later in 1990 at the birth of his first child, a son, which I'm sure has had its own challenges and complications.

Now I don't know what it always was with us,
We chose the words, and yeah, we drew the lines,
There was just no way this house could hold the two of us,
I guess that we were just too much of the same kind . . .

When he talks, you can hear the ironic humor in his voice like he's remembering just how young he really was . . .

Then a sardonic smile,

"A love that doesn't exist."

And the part of the crowd that has grown up with him could laugh along, because we understood. 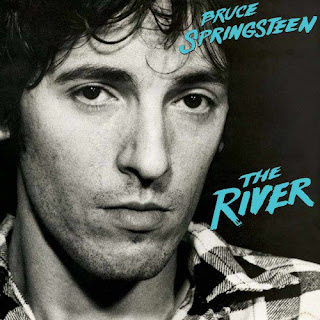 As a lawyer who has worked in criminal and domestic law since 1998, the title track, The River, has always resonated with me. Roll with me for a minute, I do have a point.

He could have written:  Mary got pregnant.

Instead, he wrote:  I got Mary pregnant.

One subject that is rarely written, or even talked about, is the devastation an unplanned pregnancy wreaks on a young man's life. I saw a lot of that in my practice where I'd sit across from a kid (who should be breaking free and growing up) and explaining the realities of a child support order.

There are reams written about absent dads, and deadbeat dads, and so on, but very little about the boy who is just as young and scared as she is, but tries to man up.

For my nineteenth birthday I got a union card and a wedding coat . . .

That line played out with one of the characters in my novel Devil's Deal where he talks about being put to work in a sawmill the summer between his junior and senior year because his dad said if he wanted to play like a man, he'd better learn to act like one.

I've heard Springsteen perform this song before, but in the context of the entire album, it vibrated deeper than as part of a set or in the random shuffle on my mp3. 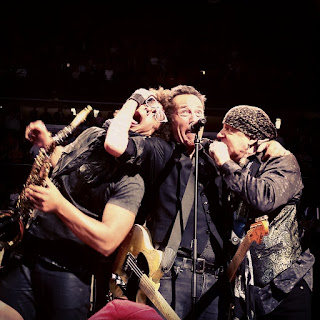 Aside from the music, which sounds as good as it ever has, this tour has one development that was expected, but still a wonderful surprise.

Up in Narnia, I've heard tons of grumbling and grumping about the replacement of the late Clarence Clemons. Yes, it was a tragedy. But a bigger tragedy would have been the loss of the E Street Band and unless there is someone capable of delivering ripping sax solos, then it ain't E Street.

He was superb during the High Hopes tour, but still finding his way. He had some enormous shoes to fill. However, in The River, he comes into full flower, a cool jiving swivel-hipped showman who owns his part of the E Street Legacy. More than once, during a solo, I saw Bruce look over with a wistful smile seemingly mixed with remembering his greatest friend and a father's pride in seeing Jake explode into his own potential. The chemistry is there. It's different. Nothing can bring back 1980, but it is unique and a joy to see.

In Oklahoma City, Jake provided one of the subtle, but great moments of the show. If you weren't watching closely, you'd have missed it.

I love watching the crowd surf during Hungry Heart. If I ever had a goal to score pit tix, it would be to participate in that. However, all crowd surfs are not created equal. Really people, if you are going to occupy the middle of the pit, you have to understand your responsibility. It's like the exit row on an airliner.

A couple of years ago, in Nashville, the crowd came perilously close to dropping him, he tilted almost 90 degrees before they grabbed him back up. Conversely, in Kansas City, they had it together. At the stage, they deftly rotated him 180 degrees and delivered him feet first onto the stage.

Unfortunately, Oklahoma City was unclear on the concept. They got him to the stage and had no clue where to go from there. Jake is not a small man. He played sax with one hand, hooked his other arm under the Boss, and hauled him out of the crowd without missing a note. The Big Man would be pleased.

The band has never sounded better. Anchored by Max Weinberg and Professor Roy, E Street shreds its way through the 3 1/2 hours and acted like they were ready to play for 3 1/2 hours more. In a superb interview with Rolling Stone at the beginning of the tour, Max said,

"My job is to be observant, to make the transitions, to focus on what Bruce is doing — to be as commanding a percussive force as I can be, so he has the freedom to go where he wants to go."

Max also said that he trusts Springsteen to know when it is time to "walk off the stage for good."

In Kansas City, the Boss asked Little Steven if it was quitting time and the crowd roared "NO."

If The River is any indication, Bruce Springsteen and the E Street Band are still well in their stride. The current tour was just expanded into July. Then there is rumors of a new album. Well, you know what the best thing for a new album would be?

I already have my place in the cheap seats charted out.
Email Post
Labels: Random Acts Writing