Noir at the Blog

Stay with me for a minute. I do have a point. And it's about the appeal of noir and why author Joe Clifford rocks it. 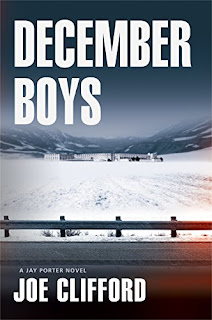 I ran away from home at 17. No, I didn't head to the big city. I moved in with my rebel without a clue, a man whose main claim to fame was being the subject of one of the biggest pot farm busts in San Francisco history. My freaking hero. This daring foray came complete with a single-wide mobile home at the end of a gravel road on the outskirts of Sonora, California.

I discovered he was cheating on me when his paramour's husband burst down our front door screaming "You're fucking my wife," and proceeded to beat him to a pulp. Gary escaped serious injury only because the bravery-intoxication severely affected the cuckold's aim.

Yet, I stayed. Because the choice was going back to my father. Even when I got to see what the wrong end of a .22 pistol looks like, I stayed.

When my zero drank himself out of his job, we ended up in Sacramento where he got a job that was ripe for embezzlement and he used this boon to nurture a non-trivial drug problem. Always wanting to be part of the fun, I joined in. I was never a junkie, that required more commitment than I was willing to give to anything, but, much to Nancy Reagan's dismay, I rarely said no.

However, the first link in my backbone was forged when I was at my job as a gas station attendant. In the same year that Senator Tim Kaine was making a name for himself as a civil rights lawyer, I was on my back on the icy pavement under an RV pumping propane. That's when it dawned on me that there had to be a better way and I got my bad self back to school. It took a couple of years, but I also chewed through the restraints and got shed of Gary. His mother hauled him to rehab and within a week I moved without leaving a forwarding address. I shoved all the household shit into a storage unit, paid the 3-month special, and mailed the key to his mother saying it was his now.

It wasn't smooth or easy and it took too long, but it's not like I had anything else that needed doing. There is that one summer in the Sacramento Valley where it was still 95 at 3 in the morning. I had classes starting at 7:45 a.m. 4 days a week, and was waitressing 30+ hours a week. I lived on speed and gin that semester. And there's nothing like a borderline eating disorder to make a girl rock a pair of size 6 spandex jeans. After graduation, I went on a 10-hour bender with friends, went home, slept for 3 days, and never touched drugs again. I didn't need it anymore. What I needed was to be some place else and I had a job offer that would take me to Washington D.C. and Chicago.

That was the first day of running away from my small town past. Along the way, I added in a law degree, discovered that I am not a corporate animal, and ran to the east coast and back again. As I sit here in a small town in Kansas (we'll leave my second marriage for another time,) I can still taste fucking Sonora, California. It still drives me.

Okay, nice story. What's the frigging point and who the hell is Joe Clifford?

Along the way, I found my voice as a writer. I'm very pleased with my first novel, but the second one has come hard. As I seek to reconnect with that voice, I went back to the tried-and-true: read. And then read more. Read in the genre you want to write and in genres that might surprise you. Use other writers' words as balm and inspiration. See how they solved the problems you face and just bask in it. The answers have been there all along.

On Facebook, I've developed an amazing circle of writer friends and as I get to know them and appreciate them, I seek out their books. That is what has led me to my foray into noir. I write legal thrillers that devolve into big guns, fast cars, and broken hearts. The theme comes back to betrayal and the price of loyalty (nothing Freudian there, nosiree . . ) But, I have other ideas knocking around in my brain and headed away from Lee Child and John Grisham and into a genre that surprised me.

And, dammit, brought it home to me that you can leave the fucking town that made you, but it will never leave you.

Enter Joe Clifford and the Jay Porter books. That bastard.

In noir, the setting is a main character. In the first book in the series, Lamentation, Clifford sets up a small New Hampshire town that has a brutal heartbeat of its own. It is every bit as vital and alive as Castle Rock in the Stephen King series. And I have a feeling, that like Castle Rock, Joe would have to bomb Ashton to the ground to kill it.

As Jay Porter winds his way through the diners and dive bars of Ashton searching for his junkie brother and attempting to unravel what appears to be, on the surface, a small mystery, the book wraps you up in the funk and secrets that live behind the tidy mini blinds on the nice streets and the beach towels tacked up over the windows of the grubby apartments over the garages and cafes.

Secrets. It's what small towns do best. And inertia. The way your own history morphs into ennui that winds itself around your feet and slowly envelopes you like kudzu. Where a nicer double-wide or becoming shift supervisor is a satisfying goal. A place where you start to care about how you match up against the people you attended high school with.

I'll avoid spoilers, but, Jay Porter only thinks he "won" and escaped Ashton. Oh no. the winner was the town. Briefly laid bare, the hacked vines of  "this is our business" regroup and close ranks and the secrets are comfortably hidden again, until the next time.

That next time is the second book in the series, December Boys. Jay is adulting to the best of his ability. He's gained the stability and the middle-class normalcy he thought he needed to be happy and it is strangling him. And like true north, Jay is drawn back to Ashton. Suffice it to say, mayhem ensues. I'm not finished with this book yet, but I don't see Jay Porter's happily-ever-after surviving the series. If it does, it will be in a drastically altered form. Because that is the way of small towns.

Bottom line, noir is at its best when the setting is treated like a vital character. The beats of the street. The masks of everyone who lives there. There are no innocents. It's just a question of whether or not they are combatants at the moment.

Go get Lamentation and December Boys and see if you can't taste the bile of high school and your home town in the back of your throat as the story unfolds.

Hey, nobody said noir was pretty. If it was, well, then it would be something else.

Okay, sure, you've talked about dark mysteries in small towns, but I like my action in the city. The gritty sidewalks, the crowded streets, and dark alleys.

Another writer friend, Heath Lowrance, shows this beautifully in his book City of Heretics. Set in Memphis, Heath takes us through the neighborhoods, those places that people a block away never see. Where the rich folks live, where the poor folks hustle, the dope houses, and bars that don't much cotton to tourists. It's a fun, nasty, dark ride. You want happy endings, read a freaking Harlequin Romance.

My own writing style is fairly spare when it comes to setting. I tend to be more about the emotions and motivations of my two main characters as they drive and shoot their way through the crimes they find themselves involved in, all while navigating the complexities of their own very awkward love affair. But I see places I can darken things up. Make the backdrop richer. My heroine just found herself mixed up in a death penalty case. She's not there because she wants to be. The luminol is about to come out in the house where the murder occurred. Hmm, let's see what shows up when the lights go out . . .