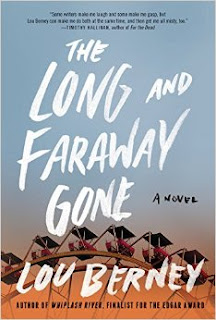 I don't write a lot of book reviews.

That's because there are far too many books I don't finish. I don't have a lot of casual reading time and I guard it like dragon's treasure. I'll drop a book like it's on fire if it isn't giving me what I need. I didn't put down The Long and Faraway Gone by Lou Berney.

In fact, I was so drawn in that I temporarily set aside Bruce Springsteen's stellar memoir Born to Run in order to devour this literary mystery. Any one who knows me knows that to come between me and anything Springsteen is something worth taking notice of.

It came well-recommended to me from friends I trust and they didn't disappoint me. I was captivated from start until almost finish (more about that later.) In fact, the end filled me with such melancholy that I had to come home and hug a puppy.

With a book like this, I can't give much of the plot without including potential spoilers. In a nutshell, there are three plot lines involving three crimes. Two are from long ago and one is happening in real time. It's the catalyst that brings the main characters together off and on, neither realizing they are helping the other. It's well handled. The memories and emotions are deftly interwoven and you never get that sense of the hazy camera cut to the "flashback sequence."

Okay, enough of that.

There are two inescapable themes driving the characters and the story. The first is the intractable gravity of your home town. It's encoded in our DNA. For some it is a launch pad. You make escape velocity and the place of your birth becomes either a nostalgic longing or a rock to rebel against. For others, it's an anchor around your feet. Every house, every business, every landmark carries the weight of memories of past glories and failures. It can also be a repository of hoarded grudges and unfinished business.

The second concept that threads the entire book together is the toxic nature of survivor guilt. Why am I alive and someone else is dead? What could I have done differently? What did I do wrong (or right?) Just what the hell actually happened?

Combine these two ideas and you have a potent brew.

The hometown theme is usually a small town, but Lou Berney uses Oklahoma City beautifully and exposes a fundamental truth. Cities, especially old ones like OKC, are a string of neighborhoods and small enclosed microcosms connected by exits off the interstate. I know enough about OKC (I went to school in Tulsa,) that I was comfortable in Berney's world.

The two main characters, Wyatt and Julianna, are anchored to OKC by great crimes that occurred in their teens. The kind of crimes that inspire and spawn true crime books, documentaries, and PTSD textbooks. And both of them, regardless of what they tell the reflection in the mirror, are wracked with survivor guilt.

Julianna, anchored to OKC by the weight of history, becomes obsessed with a cold case and stops all of her emotional growth dead in its tracks. She goes to school and has a successful career, but her secret heart is 26 years in the past, in that horrifying summer when her sister disappeared without a trace. And she is willing, even determined, to risk everything to answer the question of what happened and why. Like someone who swipes a razor blade over their own arm, Julianna keeps lancing into the wound, digging deeper to fan the flames of the pain, all in an effort to keep from moving forward in her own life. A psychic hair shirt to expunge her own guilt of being the "little sister of that poor girl from the fairgrounds . . ."

On the other hand, Wyatt ran. Actually, his family did, moving across the country a year after Wyatt, then Michael (he even ran from his name,) was the sole survivor of a mass murder in his sophomore year of high school. And he never stopped running. New towns, new jobs, new loves - one foot always out the door. He became a private investigator so he wouldn't have to commit to a day job. He could keep running, even when he was standing still. He would have never came back to OKC if not for a favor to a friend's sister. He agreed to look into a series of vandal attacks at Candace's bar. However, when he gets to OKC, the past threatens to well up and drown him in the way that only your home town can.

Wyatt and Julianna dance in their own orbits in OKC, crossing paths a few times, neither one realizing the other was riding the same pain train. Toward the end, a chance remark at a meeting in a trendy coffee house, gives the other a clue needed to solve their own mystery.

The book is literary and lyrically written. My only quibbles are a matter of taste. As someone who primarily reads and writes genre fiction, there were times when I could have gone for a little less talk and a little more action. I found a couple of the subplots and tertiary characters went on longer than needed (the Halloween parade sequence for example.) Once the mystery of Candace's bar was cleared up in spectacular fashion, I was ready to get to the resolution of Julianna and Wyatt's spirit quests. I needed the resolution.

The thread that finishes out Wyatt's storyline was brilliant and foreshadowed all along. It was one of those "duh" moments and a nice flashback/epilogue rounded it out perfectly. The "how" didn't completely clear up the "why," but it gave him a path to move forward. AND Berney avoided an obvious romantic trope and left it open and unresolved. I'm glad for that. Wyatt has what he needs to put his past behind him, but it wasn't going to be neat and pretty - he has a long way to go and a neat resolution to the chaos of his personal life would have felt like a cheat.

The Julianna storyline also resolved satisfactorily, but felt a bit pat and rushed. I just could not believe that she would get the answer she'd nearly destroyed herself - physically, financially, and emotionally - for and then just walk away from her own personal white whale without even asking "where?" Same with the flashback/epilogue. It felt a bit forced. I still want to know what really happened that early fall night. And the trip to the zoo? WTF was that about?

Understand, none of this lessens the book. I never had the urge to put it down. In fact, over lunch, I was willing to race the battery in my Kindle and finish on my phone if that's what it took to get the answers I needed.

All in all, I give it 4-stars up and a bag of chips. Grab The Long and Faraway Gone by Lou Berney. You'll be haunted and isn't that the point?