The second movie in my New Year's resolution to watch all the Oscar Best Pictures in order. Today is the winner of the second Academy Award, given out in 1930. 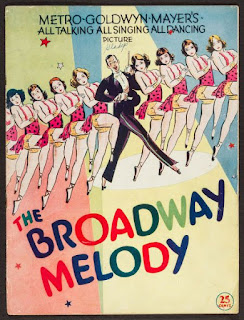 What's of note with The Broadway Melody of 1929, is that the original theater cut debuted with a Technicolor sequence, one of the first musicals to do so. It's likely that cinematic sorcery is what elevated this movie over its contenders. Sadly, that copy has been lost. The only surviving copies are all black and white. There was also a silent version because many theaters didn't have sound technology. Marinate on that for a second - a silent musical.

Competition was fierce that year. Broadway Melody beat out the gritty Howard Hughes movie about police corruption, The Racket. This movie was banned in more than one market because of how it portrayed the police. I'm guessing there were some politics at work there. Both in the nomination and in the loss. All art has a political component.

The Racket is exceedingly rare. I've only been able to find it in college library film collections. I will SO be checking it out.

Broadway Melody, the first all-talking MGM musical, also beat out the other MGM musical The Hollywood Revue of 1929, which was a cavalcade of talent. But, it had no plot. It was just a compilation of musical numbers, including Joan Crawford singing and dancing on stage. It's also rather rare, but on my must-see list. It is said that Hollywood Review was the beginning of the end of the line for many of the silent film stars when the voice didn't match the image.

What's cool about this project is not just seeing the evolution of movies and technology, but the studio politics and the social mores. 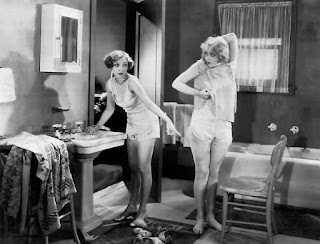 Obligatory plot summary: The Mahoney Sisters, plucky Hank and glamorous Queenie, arrive in New York City for their "big break." They've been on the county fair-dinner theater circuit to save enough money to rent a huge two-room apartment in a "theatrical hotel" that would probably rent for $5000 today (if you could find it.) But the girls have an ace. Eddie, a hometown boy who made good as a song and dance man, has got them an audition for the Zanfield Review on BROADWAY. *confetti* Eddie is also the high school sweetheart of Hank and hopes that she will finally marry him.

Until he sees Queenie. No longer a gawky teen, Queenie is now a statuesque platinum blonde with a farm girl's naive and open heart. Poor Hank. She always thought good old Eddie would always be there for her. She never realized that she was the third point on a love triangle until the very end.

The "big break" audition is awkward and almost painful to watch, but Zanfield says he can find something for the blonde, but not the "little clucker." Queenie, in a burst of girlish defiance, says they are a team, so The Mahoney Sisters are signed.

Queenie, however, becomes the toast of the show when the key sea goddess falls off the ship set in rehearsal. Suddenly, this small town girl is scantily clad in a Lady Godiva wig, on the prow of the ship, gesturing to the singer. SHE'S A HIT! And, of course, catches the eye of Jacques, the smarmy millionaire who is financing the show. 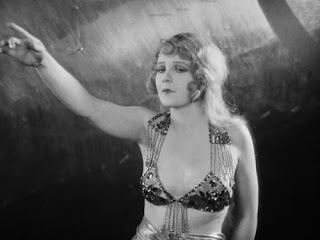 Hank loves Eddie. Eddie loves Queenie. Queenie loves Eddie but refuses to hurt Hank, so she throws herself into a whirlwind of New York glamor while ducking and dodging Jacques' ever more aggressive advances.

In the end, it's Hank who sacrifices herself for her sister's protection and happiness. *sniff*

Yeah, it's as thin as it sounds, but there are two saving graces. The first is New York in the 1920s. The Art Deco glamor of the scenes and sets is just luscious. The second is an oddly satisfying musical number of a cast dancer, in what looks like a sexy mouse costume, tap dancing en pointe in toe shoes. TAP DANCING IN TOE SHOES.

The cast included the gamine Bessie Love and the glam girl Anita Page. Love received a nom for Best Actress for her, um, enthusiastic performance as Hank.

The caddish Eddie was played by Charles King, a vaudeville showman, who couldn't convert his stage career into box office gold. 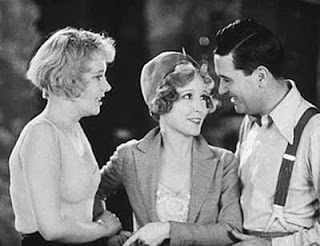 Viewed through a contemporary lens, the three had an awkward comedic chemistry that was occasionally painful to watch but overall carried the story through to the expected ending. I had to remind myself that the audiences were seeing PEOPLE TALKING ON FILM. Some for the very first time. The exaggerated city accents and over-dramatic breathless presentation was par for the course. All the director and actors had to go on was stagecraft, which lacking the intimacy of film, required the extra drama to play to the balconies.

What is fun is the look behind the scenes of a low-budget Broadway review, done as a movie. The costumes and props had a cheesy realism and the character actors decorating the background were delightful. 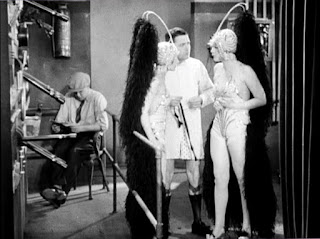 I'm sure plenty of that actually happened. The costumes were an absolute scream.

I couldn't find a good screen cap of the mouse-costumed toe shoe tap dancer. It was a WTF moment, inserted into a dance routine. It was like, "I dunno, but she's good, get her on stage now!"

What's fun about these movies looking back is that the old folks were pretty damn hip. No matter what we think today.

The dancers were healthy and robust. Curvy legs, real girl thighs, soft rounded shoulders and zoftig curves were in evidence in tiny shorts and skimpy costumes. Tons of peroxide platinum and elaborate beautiful cosmetics, coupled with an absence of, um, foundation garments conveyed the lush image of the flapper who managed to be naughty and innocent at the same time. 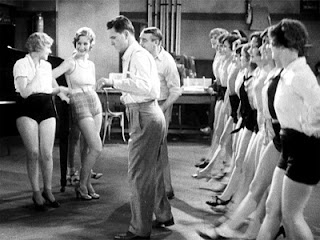 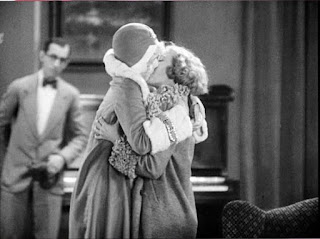 As with Wings, I was amused by the use of kissing in Broadway Melody. I don't know about y'all, but I never kissed my sister like this.

There was an also openly gay costume designer. Today, he would be seen as a flamboyant cliche, but there was no closet here. When he chucked another man under the chin and called him a cutie-pie, there was no doubt what the director was saying.

If our society could have kept the open free society of the 1920s, I think we'd be in a lot better condition now.

So, is The Broadway Melody high art? Absolutely not. It hasn't held up nearly as well as Wings or other classics of the day.

But, it's the beginning of:

Talking movies.
Musicals.
The screwball urban comedy.
The first use of the New York skyline/aerial shots in a movie.

And the music from the movie is still being played. This was the film debut of "Give My Regards to Broadway," by George M. Cohan. How many big budget blockbusters will be able to say that in 90 years? 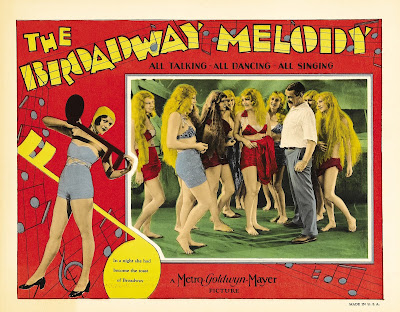 Next up - All Quiet on the Western Front.