The obligatory PSA. This discussion contains explicit racial language and discussions of race that the faint of heart may find disturbing. You are welcome to wait in the lounge. No harm. No foul.

Good books often find you when you need them. Last week I was thinking a lot about my dad on what would have been his 106th birthday. In 1952, the setting of Danny Gardner's A Negro and an Ofay, dad would have been 41. Had his family stayed in the northern Indiana place of his birth, my old man would have likely worked on the lines at one of the steel or auto plants or drove a bulldozer for the post-war construction boom. He also would have been one of the men swinging pool cues in the bowling alley Elliot and Frank pulled Chauncey out of. 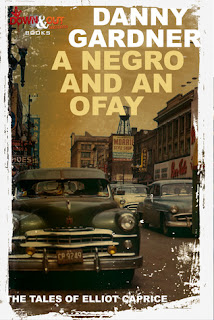 My dad was an old school racist. The kind who painfully separated good coloreds (which he pronounced kollards with a sneer he thought was hilarious) from bad niggers and thought he was instructing me in the way of things. When I was about 10, the old man ran his shopping cart over the foot of a black man who had the audacity to be shopping with his white girlfriend. Even as a kid, I knew that was wrong. But like a poison that seeps into a wound, I grew up with my own views shaded by this man. Ferreting out and overcoming personal racism is an active process that has to be pursued every damn day.

No, I didn't pick up this book to prove how progressive I am. I picked it up because I am an online acquaintance of the writer and have read some of his work. I was lucky to get an early look at his story for the anthology Just to Watch Them Die, a book inspired by the music of Johnny Cash. It was lyrical and brilliant. As is this book. I picked it up to be entertained and challenged. I was both.

My thoughts about the old man were just to remind myself and everyone that when you read a book that takes a hard cold look at this country's over-arching shame, the crime on which our fortunes were built, that you are bringing your own baggage along for the trip. That said, "all aboard . . . "

Elliot Caprice is what dad would have called a breed. With a black father who got himself killed in race riots and a white mother who dumped him with "his own kind" as an infant, Elliot Caprice has a foot in both worlds and a foothold in neither. In the parlance, "that boy ain't neither fish nor fowl." After serving valiantly in WWII on an equal footing, he came home to a country that barely tolerated him when he decided to pass and openly scorned him when they discovered he was mixed. With a sense of honor and desire to recapture that feeling of duty done well from the war, he became a Chicago cop.

But nothing with Caprice is easy and things didn't go well. With blood on his hands and a price on his head, he went underground and was going along and getting along until his fondness for big-legged women touched off a bar fight that left him in the notorious St. Louis communal jail cell known as the "meat locker."

Caprice reaches into his past and secures the help of an old friend who is now the first black county sheriff in Illinois. This is where the heart of the story begins and gives rise to some of the stunning language and dialogue that kept me swiping at my Kindle screen long after I should have been asleep.

Enter lawyer, excuse me, attorney Robin. Why do I make that distinction, because:

I love that line. I can proudly say I've made trouble for everyone else once or twice, like citing the 1946 UN Resolution on Driving in defense of a Mexican man accused of driving without a license.

With Elliot sprung from the slammer, the story takes off into familiar noir mystery territory. Shadowy millionaires who die suspiciously leaving the young wife to battle the family over the inheritance. Corrupt cops. Drugs. Guns. The threat of losing the family farm driving Caprice as he deals with his guilt for abandoning the uncle that raised him. BBQ joints. Dark bars. Jazz clubs. Route 66. And a car named Lucille. All careening toward a satisfying ending that left me wanting book 2. Oh and there had better be a book 2. I'm an attorney and you know what that means.

All interwoven with language that is beautiful in its brutality. Like this exchange from the jail between Caprice and Frank Fuquay:

"What parts would those be?"

"Is that so? My daddy was from around that way," Elliot said.

"Yo daddy, huh? No doubt sum' cracker that took the long way home one night."

That was the last slur of his mixed race that Elliot intended to hear. Big Black's buddy was a short-stack, but it was still two against one. Uneven odds were nothing new to him, so he resolved to play it cool.

"Tell you the truth, he was 'bout as inky as you."

"Yeah, boy. It took a whole lot 'o snowflake to dilute that much buck. You a tall drink of Darkest Africa, Big Black. Whycome you got no white in you at all? Yo granny wasn't pretty enough for the slave foreman?"

Hey, if you want uplifting prose that makes you feel good, read Roots. What's powerful about this ugly exchange is the authenticity. Squaring off over wooden cots on the greasy concrete floor of a dungeon of a jail, these men wouldn't be palavering ringing phrases of racial solidarity. And as someone who married a man who was called a "sawed-off batshit little motherfucker" in fights more than once, it rings true.

One of the underlying themes in the book is the frustrating nature of Caprice. He doesn't want your help. When he is desperate, he'll demand it and he'll take it, but part of him will resent the hell out of it. He'll help you. He doesn't really want to, but he will, as long as it is on his own terms and suits his sense of honor. (Except for white saviors. Fuck them. Including and especially John Creamer.)

However, at the bottom of the cipher that is Caprice was my frustrating desire to yell at a book something I have yelled at an actual human man:

LET SOMEONE LOVE YOU.

I have a feeling that will be a continuing thread throughout the series. That is going to be the hardest battle he'll fight because it's not one that can be won with hot lead. It means he is admitting that he's worth it.

Years ago in a safety seminar, a man who had been horrifically burned in an accident had one final message to the crews fidgeting in their seats, "If you don't care about your own sorry ass, think about those who do."

When you let someone love you, their love becomes your cross to bear. Your actions affect them, often in ways you can't even imagine. Elliot's not there yet, but he's working on it.

This book is 5-stars all the way. Let it entertain you. Let it make you uncomfortable. Let it make you think. Who knows, as the train pulls into the station, there might be a little less baggage waiting for you.

SIDE NOTE: The word "negro" makes us uncomfortable as fuck. In some ways, it should. It carries almost two centuries of weight. It was used to make an entire class of people the "other." In some ways, it is more incendiary than "nigger." That's because it was often the term used by the supposedly nice people.

When I was working for Legal Aid, one of the things we had to do was collect statistical data about the people who called us for advice. The usual - age, race, marital status, income, etc. I was interviewing an elderly lady and got to the race question.

She hesitated for a second and said, "You put me down as a negro. I was born negro, lived as a negro, and will go home as a negro." I did the math on her age and realized she would have been a young girl during the Tulsa Greenwood massacre. In my book, that lady gets to describe herself however she damn well pleases. Words matter and it's not my job to tell her which ones are right or wrong. I checked the bland politically-neutral box on the interview form and went straight into the problem she was having with her landlord.

I'm not sure what she would have thought of a man like Elliot Caprice with his slick suits, smart mouth, and chip on his shoulder. But I damn well know she would have recognized the world created by Danny Gardner in A Negro and an Ofay.
Email Post
Labels: Fav Writers

Elizabeth said…
A Negro and an Ofay sounds terrific. I will look for it.

I live in Buffalo where we have the Colored Musicians Club. Yes, it is still called that & it's celebrating its 100th anniversary. It started as the union for black musicians since they were not allowed to belong to the white musicians' union.
June 1, 2017 at 9:44 AM