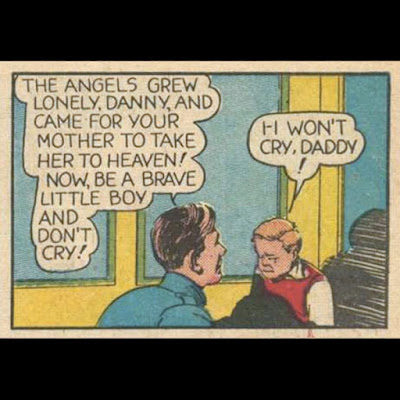 Dammit, that sounds more like a thesis than a blog post title, but stay with me for a minute. I read and write thrillers, mystery, and all-around crime fiction. I want cars to go fast, shit to go boom, hearts to be broken, and lives and nations to hang in the balance.

I do not want to rapture over the metaphor of the butterfly in the wind being the eddies in the river of life.

I also do not want heroes that are tall, stoic, square-jawed, and boring as fuck.

This is one of those terms that has become wildly misunderstood and maligned. Sort of like "white privilege." There is nothing wrong with acknowledging the existence of toxic masculinity and how it doesn't just harm boys and endanger women in real life, but also how it makes otherwise good books boring.

The essential definition of toxic masculinity is forcing contrived, rigorous, and narrow role models on all men, regardless of their essential nature. At its worst, it is defining the "ideal man" as an aggressive, hyper-sexual, unemotional Spartan.

Man, that's going to be a fun read over the next 400 pages . . . Overcoming it doesn't mean making men and by proxy male characters into squishy weak caricatures of the alpha male archetype.

I want my heroes to be, you know, heroic. And there isn't much in toxic masculinity that's heroic, either in books or real life.

In Devil's Deal, the first book of my Juliana Martin series, I realized that she needed a recurring partner, love interest, and foil. In swaggers FBI agent Ethan Price. He's a crack shot, has a Wrangler ass, speaks half a dozen languages, and, in general, looks like he belongs behind the wheel of a 1971 Challenger. And in the first draft, I hated him. He was boring. I'd fallen victim to the paradigm of toxic masculinity. He was too accomplished, too sexy, too taciturn, and too given to ironic quips.

My beloved Ethan was a cliche and he was bogging down my book. He needed vulnerability and he needed a full range of emotions. Not just a clever hobby like knitting, intended to manufacture empathy, but true emotions. Not the tragedy of losing his wife and child to murderers or the shame of an unsolved nun-murder or a secret substance addiction. Ethan needed real emotions.

And I was stuck.

I was the daughter of a toxic male, someone whose entire visible emotional range consisted of profanity, racial slurs, inappropriate sexual innuendo, and breezy bon mots.

I was the wife (and then widow) of a man who struggled with his runaway emotions and turned to feats of physical strength, prescription drug abuse, and finally self-destruction in an attempt to find balance.

I was the sister of a bright handsome athletic man's-man who tried to cope with his adversarial relationship with our father and the horrors of Vietnam by climbing into a liquor bottle and staying there until his wrecked health, marriages, and fractured relationship with his daughter forced him to crawl out and get right with his life.

In other words, I didn't have a hell of a lot of healthy role-models for crafting 3-D empathetic alpha male leading men. Then it hit me. I needed Ethan to have emotions. I have emotions. Quite a lot of them in fact. Could it be that men have the same ones?

In the rewrite, it became "What would Terri do?" I found myself splitting my own feelings and perceptions between the two characters - Juliana and Ethan. The weaknesses, the neuroses, the humor, the awkwardness . . . they both got a heaping helping of what lives in my head. Coupled with the quick-witted heroics I expect in thrillers, I think it works.

Without giving up any spoilers, at the end, they fulfilled the mission and beat the ticking clock, but she is betrayed, scarred, and a stranger in her own skin. Ethan? He's broken in places he didn't even know he had. Not only could he not save her, but he also knew that a lot of it was his fault. Yeah, a real love story . . . (worry not, it's only book #1.)

All in all, I think a hero who is awkward at seduction**, is fighting with his ex over back child support, appreciates (but still steps on his own junk) being partnered with a strong complicated woman, and is confident enough to charge forward, despite all his doubts and fears is more interesting than a tall bronzed automaton who blows up all the things, sweeps the cafe owner into bed, rights all the wrongs, but then chokes back a single tear because the song from a music box in the rubble reminds him of his childhood sweetheart dying in childbirth, and because of that, he'll never love again.

** A brilliant example of this is Court Gentry, aka The Gray Man, by Mark Greaney. On the surface, the enigmatic "Sierra Six," would seem to be the poster child for toxic masculinity. A perfectly trained killing machine, Court Gentry is a hot mess when it comes to interpersonal relationships. And it works. To become the Gray Man, he's had to sacrifice a piece of his soul and he knows it's gone. He feels like an imposter in society. No Bond, James Bond, here.

** In Ballistic, there is one of the best scenes ever. Court is aware enough to know he is being seduced by Laura. She even asks for his consent. The only thing he can do to respond is choke out, "I'm not trained . . . . " That line right there is why Greaney gets the big bucks.

Think about the last big bang movie, book, or TV show that you just didn't like. It wasn't anything you could put your finger on, it was just wrong. Now take a look at the male lead and see how many of the squares you can check off. If you get BINGO, odds are you know the answer. 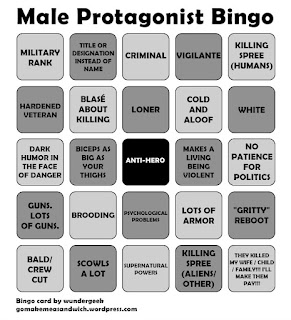 Have I accomplished well-drawn male characters? I think so. A review of Burning Kansas, says that Creighton is strong and noble without being too perfect and I love the pair of Jones and Cain in SALT.  You can check out all my books here and decide for yourself.