Readin' Ritin' and Rape - Sexual Violence and Consent in Fiction

First off, this post will be a discussion of sexual violence against women, both real and fictional. Proceed as you feel comfortable. Second off, this is just my opinion, observations, and experiences as a writer and lawyer who worked in the realm of domestic violence not enough years ago. It's not a judgment or invalidation of anyone else's thoughts or experiences.

There has been an on-going discussion in the crime writing community about the cavalier treatment of violence against women. Specifically, the trope of opening a book or show with the "dead girl in the ditch."

Outspoken actor Mandy Patinkin was clear about one of the reasons he left the blockbuster Criminal Minds:

And in the case of "Criminal Minds" and these horrific misogynistic tales, told over and over again, and the torture of women and children, where I had to go mentally was beyond darkness, to be there 16 hours a day, to stay alive and connect.

However, I continue to be a fan of the occasional bodice-ripper romance, particularly from Kathleen Woodiwiss and Barbara Cartland and several contemporary writers. Even though the questiion of consent is often danced around. I apologize to no one for this.

Shown here is a favorite. It was my gateway drug.

In Shanna, the fiery heroine (there is no other kind) is in a bind. Her father has insisted she marry. She makes a deal with a prisoner to marry her before he is hanged. She can then tell daddy that she is a widow "who is no longer a maid." It's an interesting commentary on the time period that as a woman instead of a virgin, she had a lot more agency.

Our hero Ruark, is wrongly imprisoned. He sees this dazzling woman in his cell and he offers her a deal in exchange. He will marry her if she spends one night with him as his wife. There is a practical consideration for her, she has to rid herself of that pesky virginity thing to make this believable, so she agrees.

Notice something that is present here? Consent.

Of course, she double-crosses him. In the ensuing mayhem, Ruark reminds her of their deal and there is a half-hearted scuffle on her part resulting in a brief unsatisfying consummation of their "marriage" in a closed carriage. Further along in the book, they are reunited (hey, this is a romance) and he reminds her that five minutes does not make a night and she owes him. Intrigued, she comes to his bed willingly with nothing more than some quips about her "duty" and an inner desire to show him that he should be careful what he wishes for. Well . . . . cue the white-hot exploding heat of a thousand suns.

That danged consent again. While there are hints of coercion . . . . no, not really. Shanna may be vain and shallow, but she knows what she wants and learns very quickly how to get it.

[An aside: There are rape clubs. People can hook up with strangers for simulated rapes. I say simulated because that pesky word consent pops up again.]

They also found that the two most often given reasons were sexual agency and feeling sexy. Women who were free enough in their own sexuality to say that, in their head, anything goes and explore where that takes them. The second was a sensation of being so desirable that dark dangerous men would risk anything to possess and conquer her. A fantasy like that can go a long way when you have a sick kid and a double-shift at the restaurant coming up.

At no time did women say they wanted to be held down, half-strangled, and groped by that dude at the party while his friend watched. Instead, they said that they used graphic imagery in the privacy of their own heads to explore wild, forbidden, and dark ideas. To say that Dr. Ford is playing out some sort of fantasy with her allegations against Kavanaugh is disgusting.

I've read at least one writer saying she will not read any book with sexual violence toward women. That is honorable and her decision. I don't agree with it, but I see where the message is coming from. It's a call to writers to think before you torture and to give real-world consequences via lost sales.

My own book, Devil's Deal, has one playful moment of arguably coerced consent (the sweep her off her feet kiss) and one scene of vivid sexually-driven violence. I choose to do it not because I have any desire to experience what I wrote, not even as a private thought. I wrote it because it's how the bad guys would have treated a woman in their captivity. Especially this woman. She isn't raped, but it's pretty graphic. I used some elements I'd read about different torture techniques, for example how crucifixion isn't about the wounds, it's about balance, strength, and suffocation. I incorporated some of this because it was organic to how the scene developed and to bring about the ending that leaves the future cloudy and unsettled.

I used it to break down both the heroine and the hero. Jewel and Ethan were very different people after they were rescued from the music room. It's going to hang over and between them for the rest of the series.

Jewel becomes a cranky misanthrope who has to find her way back to her own emotions and sense of safety. Ethan is so broken that he has to reconnect with his own feelings about being a man and not just a caricature of the roles he plays in undercover assignments.

The bad guys? One got his just desserts. The other, a man of power, is more ambiguous. Just like real life.

Book 2 involves the death of an exotic dancer. She was killed years ago and Jewel gets sucked into a forensic investigation about what really happened. I drew from a murder in Oklahoma where a man was railroaded onto Death Row after a coerced confession. Jewel is also forced to confront her attitude toward sex workers and that they aren't just punchlines to her jokes.

There are exactly zero rape revenge massacres (the flip side of the dead girl in a ditch coin). In fact, when she comes into contact with a strange man on the beach, she's fucking terrified as it all rushes in on her. That self-perceived weakness angers her.

The third book opens with both Jewel's mother and Ethan are trying to get her to come home to Houston and settle down. They want her safe in a controlled environment. She tells them both to fuck off, she's outta here. Her life. Her rules.

The story arc is her reclaiming her agency and resolving the world's most awkward romance.

You may disagree with me. I hope you don't, but if you do, that's cool. You can withdraw your consent to read my book. I've done it to others. I can think of a particular thriller where the writer told me just a litttttllllleeeee bit too much about his ideas of sexuality. I just wasn't willing to take that trip with him. I closed the book.

But what this old dude did was try a variant on the video game defense. Exposure to violence images didn't make him do it. Instead, prurient and sexual fantasies made Dr. Ford do it and mis-formed her memories.

I specifically told him that even after all these years:

I haven't forgotten my late husband's face when he slipped that ring on my hand.

I haven't forgotten the sound of my name when it was announced at law school graduation.

And I haven't forgotten the face of the manboy who pinned me down as I whimpered and cried in his ear.

Every time I think we've reached the bottom, I discover there is a parking garage two floors below the bottom.

Writers need to use violence, especially sexual violence and violence against women, responsibly. It's strong sauce. It's not forbidden. As in the fantasies of the women in the survey, nothing is forbidden. But . . . like any seasoning, the question is "Why?" and "What does it bring to the story?" and "Am I straying into dead-girl-in-a-ditch territory?" and "Is this story or shock titillation?"

I want your best story and sometimes those stories aren't pretty. I don't want you to censor yourself in order to guard me. I am capable of both giving and withdrawing my consent. Respect that. Invite me to take the ride and then let me decide. But make it your best. Don't cheat.

And, by the way, like a chocolate sundae, Shanna is awesome . . . one of the queens of the genre. I'll never not love it. And Barbara Cartland? That old biddy sold a billion (with a B) books for a reason. You'll never find a better primer writing and maintaining a formula-based three-act-story-arc-driven series. They are like Pringles - satisfying and predictable. In other words, they are yummy. Don't like it? I don't recall asking your permission. 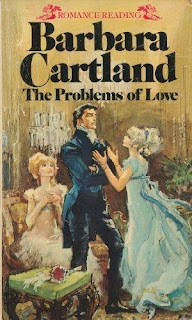