Head In the Clouds at the City in the Sky

The pottery lizard in the photo is one of my most prized possessions. In the great scheme of things, it's not overly skillful or valuable but to me it's priceless. In Native American lore, lizards bring dreams, healing, and survival. That symbolism is powerful because it also was one of the turning points of my growing the fuck up. 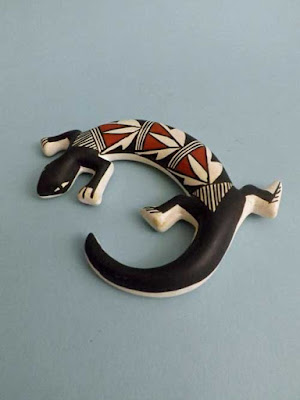 The year is roughly 1996. After a successful stint as an engineer with Big Oil, I'd decided to go to law school. The industry was in the grip of downsizing and I saw the writing on the wall. In the summer after my first year, I took an epic road trip from Chicago to Santa Monica to see a friend. It was my first major trek on Route 66.

No cell phone. No GPS. No apps. Just guidebooks, a road atlas, plenty of time, and no need to hurry. I took every side trip I could find.

One of those side trips was to the Acoma Pueblo in New Mexico. It's a must-see. It's the oldest continually occupied Native American settlement in the United States. Since 1150 AD, the tribe has lived here. It's still home to a semi-permanent population that tend the traditional mud brick huts without power or running water. I'm sure these days, the tourist interface is slicker and it's depressingly crowded. It wasn't then.

For me, it turned out to be something more than a scenic diversion.

I turned off the highway and headed into the heart of the reservation. I stopped at an overlook to take in the kind of red rock vista that can be found only in New Mexico. There were a couple of other vehicles and a white-haired lady sitting at a card table. After the obligatory photos (on FILM, bitches,) I wandered over to the two couples at the table covered with painted trinkets. One of the men was holding forth about Native American pottery symbolism and pontificating about all the patterns and designs to the oohing and aahing of his companions. After they piled back into their motorhomes, I talked to the lady. Yes, she was the artist. Yes, she lived at the pueblo.

And then the question that changed everything.

Me: Do you make the pottery?

It was then I knew she'd been trolling the previous group. I'm sure they thought their painted-whatever was some authentic piece of Native American art holding great spiritual significance that they'd purchased from a tribal wise woman. Nope. She was a grandmother who cranked them out at the local pottery shop and hustled tourists on the weekend.

And, for whatever reason, she chose not to hustle or troll me.

This was one of those moments when I learned the difference between being a visitor and a tourist.

After a nice chat, I paid $12 for this painted pottery lizard that's probably from China. The painter's name is on the bottom. It's Robin. The pattern is certainly authentic, a quick and easy rendition of the centuries-old baskets and pottery I'd see when I visited the pueblo. But my little friend here is not a mystical sacred totem. He's an adorable trinket that supported a local artist. To me, that's the wellspring of his magic. He's the repository of one of my great memories.

Access to the pueblo is strictly controlled. As it should be. The city is on top of a mesa with a several-hundred-foot drop to the valley floor. One reason the society has lasted so long is that they'd pull up the ladders when threatened and wait out their enemies. The pueblo was built to withstand a siege and the desert was their friend.

Their biggest threat came in the 1500s with the arrival of Spanish conquistadors and missionaries. A church was built and many of the natives converted. However, unlike too many other tribal settlements, their culture was not eradicated. Instead, the tribe assimilated the Catholics, instead of the other way around. To this day, their religion is a blend of the ancient traditions of both the tribe and the church. On their private sacred days, they bring out their saints and dance with them through the streets to the beat of their traditional drums. Inside the church is a painting dating back five centuries. It was a gift from the Spanish governor of the territory. It's not framed. It's nailed to the adobe wall. The dark church and dry climate have preserved it perfectly. It matches anything I've seen in the Louvre.

How do I know this? Because I stayed close to the guide, obeyed the rules, listened, and asked respectful questions. I was a visitor in a sacred space.

Conversely, the tourists snapped photos in the cemetery after being told not to, chattered through the presentation, touched things that were old when the first white people set foot in North America, and were generally tone-deaf and ham-fisted. One woman asked a question that offended our guide down to his toes. I could see it in his eyes. I don't remember it exactly but it was about their religion. It was out of line. I don't think she caught the venom in his answer. I did.

I checked the pueblo's website and see that they've really tightened up the photography rules and dress code. There's a reason for that. Too many tourists and too few visitors.

I think one of the reasons I enjoy my travels so much is that I try to don the mantle of visitor. Don't get me wrong. I love to read plaques and flip through postcards and if you're on my souvenir list, it'll be silly and cheesy. But I try to always remember whose space I'm in. In Paris, I had to tell a woman to keep her toddler from smearing its hands across a Picasso. She gave me quite the dirty look in response. She'd paid her admission and was entitled to the space.

And if I ever forget that, I have the sing-song voice of an elderly Native American woman in my head to remind me that if I want to be hustled, trolled, and considered with contempt there will be someone more than happy to oblige.

And if you're in New Mexico, visit the Acoma Sky City. It's stunning. I can't even describe the rugged majesty and aura of ancient magic.

Hydrate, use the bathroom, change into comfortable shoes, follow the dress code, mute your phone, pay your fee, get on the bus, stay on the path, don't smoke (or fucking vape,) don't smuggle in snacks, listen to the guide, don't touch anything, respect the photography rules, make a small (or large) purchase from one of the local artists, keep your opinions to yourself, and then leave. Your specific face may not be remembered by the residents but your actions will be and you'll always be welcome. And, by the way, they'd love it if you stopped by the casino . . . *winky face*