I grew up in car culture. My brother was a gear head. My old man liked Chevys - pearl white, chrome, and fast as hell. I thought every girl spent her birthday at the Autorama Car Show checking out splashy wheels like the George Barris "Snakepit" sporting 6 Cobra V-8s. I was raised by a single father so going to the drag races on Saturday night didn't seem strange. Yeah, I didn't get invited to a lot of slumber parties. But I know that feeling of plugging in my fuzz buster on a long stretch of midwestern highway and working the gears. First, the push back acceleration, then the wind-up scream of the engine, feeling the resonance frequency ripple through the frame, and then burying the needle. 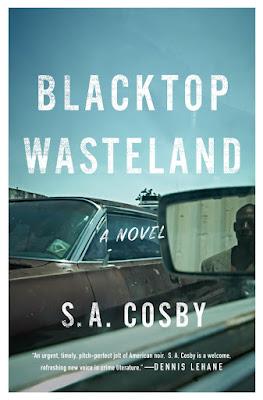 So, I picked up my ARC of BLACKTOP WASTELAND by Shawn Cosby with a lot of curiosity. He's an internet friend and I sat with him in the back of the room at the Anthony Awards at Bouchercon, St. Petersburg.

After reading this amazing book, I have a feeling that next year I'll have to find somebody else to sit with because he'll be up front collecting some award bling.

The story has two tracks. The most obvious, the one that slaps you like an insect against the windshield is the high-speed chase/romp/heist storyline. Shawn commits random acts of vehicular mayhem, including a near unforgivable crime against a Charger with the police package.

That particular scene rivals any car chase movie from the golden age of muscle cars in the 70s. And this is coming from someone who won a bet by identifying "Dirty Mary,  Crazy Larry" from the font in one of the opening credit frames. (Bit of trivia, the supermarket Peter Fonda robs in the opening scene was in my hometown of Sonora, California. It's where we shopped.)

Cosby nails the car scenes, even the ones that hurt my nerdy little heart. The book opens with the main character, Beauregard "Bug" Montage, on the hunt for a drag race. He's short on the mortgage and the bank is getting ugly. He's ready to double the grand he's got in his pocket, and he doesn't mean fold it over. He was sure he's found the right asshole in Warren Crocker. You see, Warren has a lot of flash but he also has a bad valve.

And here is where we are introduced to one of the beautiful passages in the book:

"Bug turned and got in the Duster. When he started the car, the engine sounded like a pride of angry lions. Vibrations traveled up from the motor through the steering wheel. He tapped the gas a few times. The lions became dragons."

Oh yeah, that's the stuff right there. It turns out that Bug Montage is a wheelman. You grab it, he'll rabbit. Face it, a heist is nothing but glorified shoplifting until you are safely away leaving the cops with nothing but empty plates because you ate their lunch.

But, on the other hand, Beauregard Montage is a businessman and a family man. He's a father of three, two sons with his teen years' sweetheart and a bonus baby you'll learn about as the story unfolds.

If the car work is the flash that'll keep you digging into your popcorn when this becomes a movie (and, oh my, it should,) the inner conflict between the essential natures of Beauregard and Bug is the depth of the story.

I love hometown stories and there is always one fundamental question:

"Is your childhood made of roots or chains?"

Beau thought he knew the answer to that. Bug had different ideas.

Without giving any spoilers, Beau is against the wall with money problems. His carefully crafted fine-young-man-who-loves-his-mama life (they had a double-wide FFS, a sign of respectability in a small poor town) is teetering. His mechanic skills aren't paying the bills. And then Bug gets an offer he wants to refuse, but can't.

Just a quick one-off. The Sessions boys have it all figured out. They've got access. They need egress. They need Bug. Against all his better judgment but with zero options, Bug says he's in.

Famous last words. When something seems too easy . . . well. But just enjoy this part. The amazing wheel work, the crimes against government vehicles, the value of having a rigid plate welded to your undercarriage. Also, always carry a neck pillow. #protip

Suffice it to say, mayhem ensues.

But buried in all the automotive theatrics, is Beau's decision to let Bug take the wheel, literally and figuratively. He has to go places in himself and cross lines that he thought he'd left behind. He has to channel his father, Ant Montage. He has to go back to being the kid who slipped behind the wheel and hit the gas to save his father's life. The guy who can swing a wrench and feed you your own teeth as easily as opening a beer.

Your hometown never lets you forget who you are. Beau is reminded of it every time he drives by the abandoned Tastee Freeze. Local legend says the bloodstains are still there, soaked into the cracked sun-baked pavement. This is a feeling unique to small towns. It reminds you, for better or worse, every time you drive by it because nothing around there ever changes. But, it also bothers the fuck out of you if it's torn down because, man, that's your history.

Roots and chains. Because sometimes the thing that never changes is you.

The central talisman to the past is the candy apple red Duster we met in the first scene. It belonged to Bug's dad and came to him in time. When he sat in it he remembered everything from the sound of the downshift to the smell of the chocolate milkshake. And the crunching sounds. It roots and chains Beau and Bug together.

To end this. To get as even as he can, Bug has to go to horrifying places both inside and outside himself. Places that terrify his wife. She wonders if she's lost Beau forever and she's just another Montage wife left to raise kids on her own and watch the family history start to curl around their ankles.

And the truth is that Beau doesn't have an answer for her.

The last line tore at my heart. To quote the writer, "It was like getting hit in the face with a pie that had a padlock in it."

I give BLACKTOP WASTELAND 5 wrenches up with a tank of nitrous. Be there. 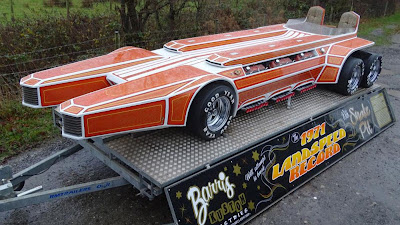 As a reward for hanging in with me, this is the George Barris Snakepit. All these years later, it took me about 20 seconds to find it. This was my childhood. Who needs My Little Pony?

It should get a boatload --- trunkload? --- of awards next year.