I'm definitely a denizen of the web. Yes, I read the comments so you don't have to. Because of that, I ventured into CULTURE WARLORDS by Talia Lavin. The self-proclaimed "mouthy Jew" went on a deep dive in some of the darkest corners of Ye Olde Internet.

Imagine a square. At the corners are antisemitism, sexism, racism, and homophobia. Now connect those corners with diagonals. At the crossroads in the center is a heavily-armed white man in a Hawaiian shirt and a MAGA hat, reading a screed on his phone about how he has been denied his divine rights. That's where we start. That is ground zero for the bugaloo and the hootenanny.

Warning: this post may contain wording and images that are racist, sexist, and homophobic. 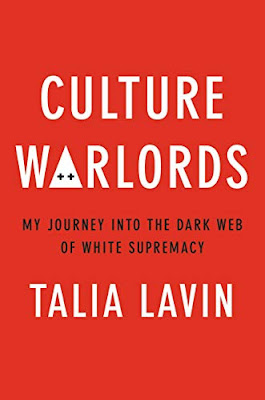 The author Talia Lavin is a force to be reckoned with on Twitter, and as such, has drawn the fire of every last mouth-breathing bottom-feeder that infests that space.

In the introduction to the book, she'll detail how she'd find her name and picture on white supremacist threads with questions like "Would you fuck a Jew?"

She fights back with snarky self-deprecating humor, a fierce determination, and vocabulary that Merriam-Webster would envy.

This isn't an easy read. It's not summer fluff or a "light beach read." But hang in there and be ready to learn something.

She starts out with a detailed and thoughtful discussion of what she considers to be at the root of it: antisemitism. The relentless "othering" of a group in order to create a sense of superiority. For them to be great and united, they have to have a common enemy.

I knew quite a bit about it but her discussions, for example, of the line between Henry Ford and Hitler but it's still disquieting. Read it. Be uncomfortable. Own it. And while it's not a topic of this book, Ford's contemporaries also tended to be eugenicists - with white protestant being the standard. Worship of the non-existent exalted Nordic is our history and dark heritage.

She talks quite a bit about de-platforming white supremacist groups on social media. However, social media is not a chain, it's a web. When you snip one thread, the groups reform somewhere deeper. So, instead of the public, not-overly secure platform of Facebook where racists are regularly called out and doxxed, they have moved to encrypted apps like Telegram. When programmers won't give up their encryption keys to the Russian government, that's as secure as it gets. Unless they out themselves (and Talia got several to,) they are truly anonymous. And anonymous on a platform where real Russians and Ukraine-trained fighters have access to them and their grievances - both real and imagined. It's a conundrum. She had to hold her stuff and keep her anonymity when she saw her own name pop up time and time again.

It's not all gloom and doom. She went underground in a whites-only dating site (now defunct, a couple of times, but looks like it's back as WASP Love.) She goes into what it took to create profiles that passed on these sites and then holding the line while she drew these guys into conversations to get them to out themselves. There are some really funny moments. As a New Yorker, she chose Iowa. She's lucky she didn't get busted. The state is so sparsely populated that her bluff could have been called too easily. I'd have chosen someplace like Missouri. But she made it work as the AryanQueen1488 (for "The 14 Words" and the 88 meaning "Heil Hitler.")

Also, I'll confess, I didn't know about Soph. Wow . . . is all I can say. A teen, I don't know what, YouTube racism-spewing internet star who was de-platformed and is now safe behind a paywall at censored.tv. I couldn't access her vids, but reading the descriptions was enough for me.

The vocabulary of the four corners of my square is rough and she doesn't pull any punches. But, again, don't look away. You can't say #blacklivesmatter and #metoo and "may their memory be a blessing," and be anything more than a performative ally unless you are willing to look into the nest.

After Eliot Rodgers (now known as "Going ER,") I did my own tour around the man-o-sphere, peeking into the world of incels and PUAs. The biggest site is incels.co, but even they've gone underground compared to some of the stuff I used to see.

And, of course, she examines the connection between Christianity and white supremacy. The worship of the Templar knight ridding the holy land of the usurpers. It's a heady brew for disaffected young white men who believe the social contract betrayed them. When you've been told you are superior, equality feels like oppression. It can't be their fault. So, time to boogie.

We can't just laugh at them anymore. Yes, while many of them are Meal Team Six, this last round of street protests was peppered with vehicle rammings and other violence. They haven't been this emboldened since the old days of the KKK. And their leaders are trained, smart, and have weaponized the web.

CULTURE WARLORDS is that dense chewy read that keeps you turning pages. Don't look away. Talia is the essence of antifa. She's bold, funny, smart, fearless, and uses the best weapon that we have, the bright light of day. Check it out, I dare you.


Remember 8chan and how it was applauded when their web host turfed them? They are back under the guise of "8kun" and subthreads and images like this one are rampant. Donald Trump is not the cause, but he is a symptom. He gave them what they crave: permission and validation. That's the humid warmth they need to spread like mold. We need to keep forcing them out of their nests. But don't think chasing them off of conventional social media is winning the war. It's just another battle.